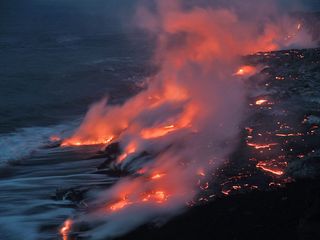 Hot magma deep within Earth may have heated carbon-rich rocks, releasing methane into the atmosphere and leading to an ancient warming event, scientists suggest. Here, lava from a 2004 Kilauea eruption flows into the sea.
(Image: © USGS)

Kilauea means "spewing" or "much spreading" in the Hawaiian language, referring to its frequent outpouring of lava. The volume of erupted material from Kilauea covering the land there is enough to pave a road across the world three times, making it one of the most active volcanoes  on the planet. Hawaiians born after Jan. 3, 1983, have never known a time when Kilauea's Pu?u???? cone wasn't oozing lava.

The Hawaiian Volcano Observatory commemorated the anniversary with a lecture on the volcano's history. More than 200 people came to the talk, which was part of the observatory's "After Dark in the Park" lecture series.

2011 was an exciting year at Kilauea. Lava rocketed from a new fissure on Kilauea’s east rift zone, between the Pu`u `? `? and Napau craters. A fissure is a split in a volcano that opens in a straight line. The new fissure, called Kamoamoa, created amazingly tall lava flows.

In December, scientists reported their discovery of lava deposited by Kilauea's most deadly eruption in recorded history, which killed more than 400 people in November 1790.

Today, people often walk near Kilauea's sluggish rivers of lava that flow down the mountain's slopes and into the ocean. These "gentle eruptions" are rarely a threat unless people are doing something foolish, such as treading too close to the hot lava.

Big crowds have swarmed on Kilauea in recent days to watch a burst of lava pour into the ocean. The lava stopped flowing into the ocean today, but it could start again in the coming days, Babb said.

Later this month, the observatory will celebrate its 100th anniversary and will open its doors, which are normally closed to the public, for an open house on Jan. 21.