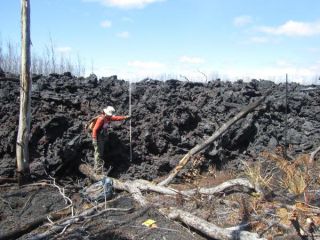 A geologist measures the thickness of a lava flow produced by the Kamoamoa fissure eruption.
(Image: © USGS/HVO.)

The huge lava piles were created as lava rocketed from a new fissure on Kilauea's east rift zone, between the Pu`u `? `? and N?pau craters. A fissure is a split in a volcano that opens in a straight line.

As the fissure opened, spectacularly fountaining lava flowed downhill, forming huge piles of rubble on the sides of the flow.

In the above image, a geologist is holding a measuring stick that is 6.5 feet (2 meters) tall. The lava tore through a forest, and the aftermath is also seen in the image.

The lava that erupted from the fissure is a basaltic lava called 'a'? (pronounced ah ahh), which is Hawaiian for "stony rough lava." This basaltic lava is one of the three basic kinds of lava, along with p?hoehoe smooth and unbroken and pillow lava piles of round blobs.

'A'? lava piled up along the roughly 1.8-mile (3-kilometer) flow from the west end of the fissure. The lava eventually ran into lava from a 2004 flow from the Pu`u `? `? crater. The 'a'? lava extended so far because it formed levees, which channelized its flow, said Janet Babb, a geologist with the Hawaiian Volcano Observatory.

"Levees of 'a'? lava form because it shears, kind of like silly putty," Babb told OurAmazingPlanet. "If you apply a slow-steady stretch, you can make it stretch. But you can also snap it." The lava that snapped off formed the brittle piles seen in the images.

In the image below, scientists measured the flow thickness using a 3.2-foot (1-m) orange pole. In this image, the smooth and shiny p?hoehoe lava from Pu`u `? `? crater is seen below the 'a'? lava from the west fissure.

Both the east and west ends of the Kamoamoa fissure are still fuming, but no lava is erupting.