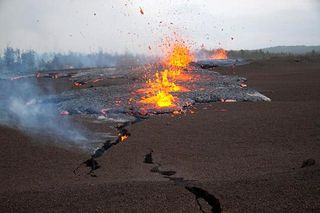 Hawaii's eruptive Mount Kilauea turned up the heat over the past several days with spectacular eruptions that have been captured in images and video.

Lava rocketed from a new fissure on Kilauea's east rift zone, between the Pu`u `? `? and Napau craters. A fissure is a split in a volcano that opens in a straight line. Kilauea's new fissure came after the floor of the Pu`u `? `? crater collapsed March 5. [In Images: Hawaii's Mount Kilauea Erupts .]

Sporadic eruptions continued overnight and yesterday (March 6), according to scientists at the Hawaiian Volcano Observatory. Periods of spattering lava were highlighted by gushers up to 80 feet (25 meters) high. Amazing images and video of the eruptions were captured by news outlets and the U.S. Geological Survey.

The fissure is located west-southwest of the Pu`u `? `? crater in a remote area of Hawaii Volcanoes National Park. Parts of the park have been closed due to the eruptions.

Hawaiian Volcano Observatory scientists found that the Pu`u `? `? crater floor dropped at least 377 feet (115 m) during the collapse. The collapse has all but ended, with only a few cascades of rock fragments falling from collapse blocks.

The Pu`u `? `? crater isn't the only one that's been active lately the lava lake on Kilauea's summit had been rising lately, but recent small collapses along the vent's wall triggered a drop in the lava levels.

Lava flows elsewhere on Kilauea are still active but sluggish. How long the new eruption continues depends on what caused it.

"The new eruption could just be an emptying of the summit and Pu`u `? `? craters, which might mean a shorter eruption, or a new injection of magma, which could mean a longer eruption," Erik Klemetti wrote on the Big Think's Eruptions blog.

Based on similar events in past years, it will take a day or two to see if the lava supply to these flows has been cut off by the new fissure eruption, according to the observatory.

K?lauea's fissure eruption can be seen on a webcam here.