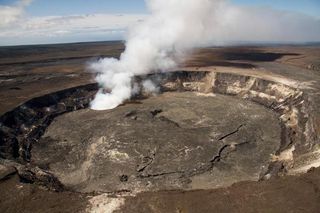 Inside that steamy vent in the Halema`uma`u crater is a lava lake.
(Image: © USGS.)

Scientists are keeping a close eye on a rising lava lake inside a crater on Hawaii's eruptive Mount Kilauea, one of the world's most active volcanoes.

A number of earthquakes recently ruptured in Kilauea's East Upper Rift Zone. Seventeen of the quakes were strong enough to be located within Kilauea volcano seven were located within the upper east rift zone, three occurred beneath the summit caldera and seven erupted on south flank faults. Scientists at the Hawaiian Volcano Observatory are watching to see if the tremors could trigger new eruptions .

"The ongoing seismicity within the upper east rift zone seemed to peak around the magnitude-3.8 quake Thursday morning [Feb. 10] but we will continue to watch this area closely," said a statement from the Hawaiian Volcano Observatory.

Explosions in the Halema`uma`u crater can shoot rocks and lava several hundred meters from the vent.

The above movie shows the lava lake in Halema`uma`u crater taken as USGS scientists flew over. When the video was taken, the lava was at a high stand during part of a rise and fall cycle, when very little gas is emitted and views are clear. About seven minutes after the video was taken, violent spattering and gas release occurred from the lake margin, triggering a drop of the lava level.

The lava lake is in nearly constant motion. It makes a continuous "crashing wave" noise as the churning lava gases are released from the lake surface. Scientists made a recording of sounds from the lava lake on Feb 14. Have a listen here (mp3).

The Hawaiian Volcano Observatory has webcams pointed at the crater. Take a look here and here.