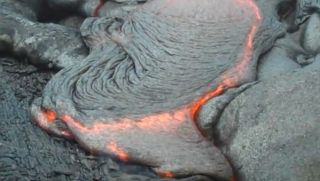 Hawaii's Kilauea volcano produces breathtaking images of oozing lava, but for one subdivision, the beauty has been devastating.

Lava has burned down the last home at one unlucky subdivision on Hawaii's Big Island. The slowly moving lava destroyed the home in the Royal Gardens subdivision, where the owner had been living for 30 years, reported local news station KHON2. The home was destroyed between March 2 and 3.

"There's nothing left but roofing," the owner, Jack Thompson, told the Honolulu Star-Advisor. "There's a huge flow where my living room used to be. Soon, there's going to be nothing left but rock, just like the rest of the subdivision."

The subdivision was built in what later became an active volcano field on Kilauea. The 61-year-old resident had watched through the years as lava slowly burned down his neighbor's houses, while just missing his. He was finally forced to evacuate when a fresh lava flow burned thru the forest directly toward his house.

Kilauea, which means "spewing" or "much spreading" in Hawaiian,has been continually oozing out lava since Jan. 3, 1983. People often walk near these sluggish rivers of lava that flow down the mountain's slopes and into the ocean. These "gentle eruptions" are rarely a threat unless people are doing something foolish, like treading too close to the hot lava. Occasionally though, the lava will slowly consume houses in its path.

One of the five volcanoes that form the Island of Hawaii, Kilauea is believed to be the home of Hawaii's mythical goddess of volcanoes and fire, Pele.