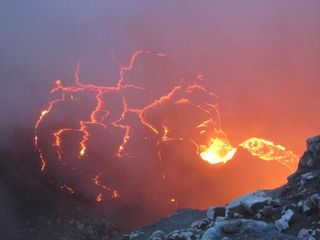 The lava lake in the crater looks somewhat like an above-ground swimming pool, and is currently the only lava erupting on Kilauea's east rift zone. Volcanic craters are large holes created by volcanic activity. Inside of craters are vents that erupt lava. [In Images: Hawaii's Mount Kilauea Erupts ]

The above image shows the lava lake deep within the vent cavity in Halema`uma`u crater. The small, circular lake has a crust on its surface and is partly fed by lava rising from the west portion of the vent floor underneath the lake.

The lava lake remained at a stable level deep in the vent as of May 19, according to the HVO.

Earlier this year, explosions in the Halema`uma`u crater shot rocks and lava several hundred meters from the vent.

The Hawaiian Volcano Observatory has webcams pointed at the crater. Take a look here and here.