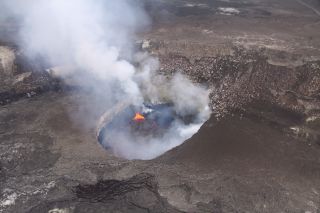 On March 15, south winds permitted clear views into the south portion of Halema'uma'u crater, which is often obscured by thick fume. The bright orange area is the location where lava at the surface of the lake sinks back into the system.
(Image: © USGS)

On this day in 2008, molten lava blasted through the summit of Kilauea volcano at 2:58 a.m. Hawaii time.

The blowout built a lava lake in Halema'uma'u crater, itself the remnant of a past explosion. After five years of close study, scientists think the lake is like no other place on Earth. The lava is as light as water. The lake level rises and falls by the minute, the hour, the month. Watchers who study the pit's "breathing" can forecast coming eruptions, because the gaping hole is a direct conduit into Kilauea's magma reserves.

"It is one of the most dynamic lava lakes on Earth," said Matt Patrick, a geologist at the U.S. Geological Survey's Hawaii Volcano Observatory. "It's a very beautiful sight, and it's a really nice reminder of how active Kilauea and Hawaii's volcanoes can be."

The near-permanent gas plume rising from Halema'uma'u crater hints at the unusual lava filling the lake. It is filled with gas bubbles, so the lava is very low density, Patrick said.

"It's about half or a third of what solid lava rock density would be, and this is the first time we've been able to quantify that," he told OurAmazingPlanet. Kilauea's lava lake is one of the few places on Earth where geologists have access to an active summit eruption.

When the lake is high, the gassy lava surface flares with small explosions throughout the day, as seen on the Volcano Observatory's 24-hour webcams. At first, researchers thought that giant, bursting gas bubbles caused the explosions, Patrick said. But high-speed video revealed falling rocks from overhanging crater walls collapse onto the lake surface, sparking the bangs. The flares launch volcanic bombs and blocks from the lake, which land on the now-closed parking lot where people once left their cars for a peaceful stroll.

"That visitor overlook is now totally broken and burned," Patrick said. Visitors can still peer into the pit and caldera from several spots on the crater rim in Hawai'i Volcanoes National Park and hear the lake rumble.

Kilauea's two eruptions are in sync, Patrick said. For example, before the big Kamoamoa eruption in 2011 on Kilauea's east flanks, the summit lake levels rose and small earthquakes shook the mountain.

"The summit lava lake is like a fluid pressure gauge, a manometer," he said. "These lava lake fluctuations correspond to lava level fluctuations in the East Rift Zone. We can look at the lava lake and if the level is really high, it means the system is pressurized."

Though the five-year-eruption has been a boon for scientists and tourists, there have been negative effects for island residents. The sulfuric acid from Halema'uma'u's gas plume creates vog, or volcanic fog. Just like pollution, vog is hard to breathe for residents with respiratory problems.

"I've heard anecdotes of people downwind having to move because of breathing problems," Patrick said.

Farmers and ranchers have also suffered since the summit eruption began in 2008, Patrick said. Vog corrodes iron fencing and damages crops, including flowers and vegetables. While vog has been a problem for the Big Island since Kilauea first began its current eruption in 1983, the U.S. Department of Agriculture declared a disaster zone for farmers in 2008, and renewed the declaration in 2012.

"There have been some major hardships in many ways for local residents because of the vog," Patrick said.