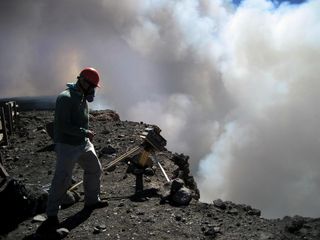 A geologist from the Hawaii Volcano Observatory checks on a time-lapse camera positioned at the rim of Halema'uma'u crater, at Kilauea's summit.
(Image: © USGS)

Ever wonder how those spectacular photos and videos of the long-erupting Kilauea volcano's burbling lava lakes beam live to your laptop?

The U.S. Geological Survey drops a crew right on the fiery edge of Hawaii's active craters, rifts and lava flows. Either by foot or by helicopter, USGS scientists deploy custom-built webcams and thermal cameras to monitor Kilauea, one of the world's most active volcanoes. Leaving behind expensive equipment is not without challenges: An avalanche carried away a webcam at the rim of Kilauea's Pu'u 'O'o crater in May 2010. But the sturdy camera survived its fall, even snapping a picture of its broken tripod once it reached the bottom of the rubble pile.

The sudden, dramatic changes caught on camera capture public interest. When Pu'u 'O'o crater'sfloor collapsed on March 5, 2011, four people watched the dust-laden gas plumes rising live online, then emailed the USGS to ask what was happening. Web watchers had a better view than USGS scientists, who were in a helicopter west of Pu'u 'O'o crater at the time.

From the late 1990s, when low-resolution video required more than 300 feet (90 meters) of heavily insulated cableand a line-of-sight radio repeater, to today's 5-megapixel cameras transmitting via Wi-Fi and cellular modems, USGS scientists continue to improve and improvise their watchful eyes on Kilauea.

OurAmazingPlanet: How does the USGS get these awesome images and videos?

Matt Patrick: We have a number of different kinds of cameras. We have webcams, which are just like the cameras you would use at home. But they have some limitations — one of the big limitations is that the view of activity is often obscured by thick volcanic fumes. Often you won't see anything. Even when you're standing in front something really remarkable, it can be totally obscured. The thermal cameras have proven a lot better — and a lot more effective — at seeing through those thick fumes. They give us a view that we just wouldn't otherwise have.

OAP: Do you ever have a problem with sulfuric acid from the fumes eating away at the cameras?

M.P.: Volcanic fumes are a big issue. Things that are metal, even if it's stainless steel, will often get corroded, so we absolutely try to minimize the metal that is out there. You can actually get premade camera enclosures, but they tend to be made out of metal. They're not designed for a corrosive environment like inside a volcano. What we use are hard plastic waterproof cases.

OAP: How long do the cases last?

M.P.: They actually can last for several years. We've only had a couple fail. We have to modify them with little windows for the cameras to look through, and holes in the back for power and Internet cables to pass through. But luckily, we have people at the observatory who are really handy at stuff like that.

OAP: How many cameras are on Kilauea?

M.P.: We have a total of 14 cameras on Mauna Loa and Kilauea, and that includes visual cameras and thermal cameras. We have five thermal cameras. Halema`uma`u crater is probably one of the most interesting views with a thermal camera right now. And we also look at Pu'u 'O'o crater, that's out on the east rift zone, and we just put a thermal camera on the summit of Mauna Loa. Mauna Loa last erupted in 1984. It doesn't show signs of having any kind of imminent activity, but it's a very active volcano and it will eventually erupt again. [Explosive Images: Hawaii's Kilauea Erupts for 30 Years]

OAP: How do you get the images from the cameras?

M.P.: They're like webcams; we access them over the Internet. A lot of the transmission is done with Wi-Fi radios, so we have to have repeater stations that transmit the Wi-Fi signal.

OAP: And is the signal pretty good up there?

M.P.: Yes, usually, where we have them, but it's one limitation that we do have to set up these Wi-Fi radio links. We're starting to use a different type of telemetry, which is called a cellular modem, so it actually transmits data over the cellphone networks. It's a little more mobile than our existing setup. We use that with some of the cameras.

M.P.: One of the craziest things was watching the lava lake at the summit drain over the course of a day. It dropped about 170 meters [550 feet] on March 5, 2011, and that's a lot of lava that just basically disappeared over the course of a day. It did that because we had this east rift zone eruption, the Kamoamoa eruption. That depressurized the system, causing the lava to drain. It actually drained from the summit at the same time that the floor of Pu'u 'O'o crater drained as well. We have a great time-lapse video of that. [Watch Kilauea's Pu'u 'O'o crater collapse]

OAP: Do you ever have animals wander in front of the cameras into the lava field?

M.P.: Luckily, no. I haven't noticed anything like that. Usually our fields of view are limited, so we just see the [volcanic] activity.

OAP: What is the value of the cameras in terms of public outreach and scientific research?

M.P.: I think the cameras are really great at doing both of those. You can go to our website, at www.hvo.usgs.org, and see the live images, and we've put all the camera images on the public Web page. It's great for involving the public and getting them interested in the activity. We have the daily updates, which are text updates, but people say a picture is worth a thousand words, and people love seeing the cool images of the activity.

The camera images are actually involved in a lot of ongoing research projects.

We use the cameras to track the lava lake levels, and we've done that at both the summit [at Halema`uma`u crater] and at Pu'u'O'o crater. We've noticed that the lava levels are nicely coupled, so it shows that there's this hydraulic connection between the summit and Kilauea's east rift zone. We can use the height difference [between the summit and the east rift zone] to infer things about the hydraulics, for instance, the radius of the magma conduit. [Amazing Images From Kilauea's Lava Lake]

OAP: So what are the future plans for monitoring Hawaii's active volcanoes?

M.P.: There are a bunch of things. We have automated analysis scripts to actually track some of the cameras and do a lot of the work for us on the images. [The scripts] track advancement of the lava flows that erupt from Pu'u 'O'o crater and make their way down to the ocean. We can identify them automatically on the webcam and track them on a day-to-day basis. There's still a lot of work to make those scripts better, more reliable and smarter and more sophisticated.