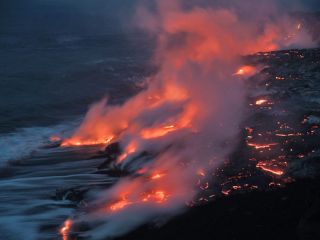 Lava from a 2004 eruption at Mt. Kilauea flows into the ocean. Lava emits toxic gases, and, when combined with seawater, it can form mists of corrosive hydrochloric acid.
(Image: © USGS)

Visiting a volcano comes with all the dangers of climbing a mountain, and then some.

Worldwide, more tourists are exploring volcanoes, but they can encounter surprise eruptions, toxic gas emissions — think misty clouds of hydrochloric acid — and scalding water, points out in the April issue of EARTH Magazine, published by the American Geosciences Institute.

More than 100 million people visit volcanic sites globally every year. About 2 million people visit Hawaii Volcanoes National Park, home of the Kilauea volcano, every year. But between 1992 and 2002 at the Hawaiian park, 40 people died, 45 were seriously injured and 53 received minor injuries. Since then, incidents have decreased, according to the article, written by Sara E. Pratt. [Images: Mt. Kilauea Erupts]

One of the more exotic threats associated with volcanoes is toxic gas. In addition to the gases the lava itself emits, such as sulfur dioxide and hydrofluoric acid, the lava can interact with seawater to produce what is called laze, or lava haze in the form of highly corrosive hydrochloric acid, which has claimed lives at the Hawaiian park.

Volcanoes are receiving more attention as a result of geotourism, an offshoot of ecotourism, and thanks to tourists seeking adventure. A survey at the Hawaiian park, with resulst published in 2004, revealed many tourists were unprepared to for standard hiking conditions, and 93 percent admitted to venturing past warning signs. Another study, published in 2006 by the same researcher, Travis Heggie, found that of 5,947 incident reports recorded in Hawaii Volcanoes National Park between Jan. 1, 1993 and Dec. 31, 2002, 53 percent of all visitor injuries took place at the park's eruption site; and of the 1,698 severe injuries, 69 percent occurred at the eruption site.

No international safety guidelines exist, but experts say U.S. parks, particularly Hawaii, have the best safety strategies, according to the article.