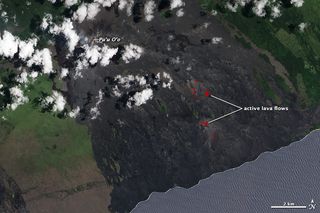 Kilauea continues to earn its reputation as one of Earth's most active volcanoes.

Since January 1983, Kilauea has erupted continuously, coating much of the southeast coast of Hawaii's Big Island in fresh lava, which glows red in this satellite image.

The center of the eruption is Pu'u O'o — a crater southeast of Kilauea's summit. From here, the molten rock flows through lava tubes down Kilauea's steep slopes. The lava emerges on the pali (a Hawaiian word for cliff) and on the coastal plain, further down the mountainside.

The Earth Observing-1 (EO-1) satellite snapped this photo on June 12 with its Advanced Land Imager, which measures infrared light. The red color indicates heat, either from liquid or recently hardened lava still hot enough to glow.

Earlier this month, fresh lava emerged at Pu'u O'o, then traveled through lava tubes downhill. The red hotspots show where molten rock has broken out of tubes near the coast, and the lava lake that fills Pu'u O'o.

Visitors are warned not to approach the lava; according to the U.S. Geological Survey, areas near vents could erupt or collapse without warning. Potentially lethal concentrations of sulfur dioxide gas may also be present within 0.6 miles (1 kilometer) downwind of vent areas like Pu'u O'o.