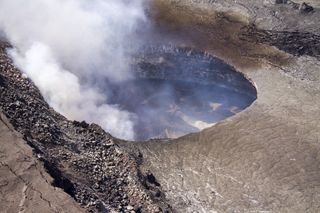 The orange glow atop Hawaii's Mount Kilauea was a little stronger yesterday (Jan. 15) than it has been in recent weeks. The volcano's lava lake lapped over the inner ledge of its vent, reaching a new high and bring molten rock closer than ever to the floor of Halema'uma'u crater.

Since fresh lava appeared atop Kilauea in 2008, the lake level has varied from near the crater to out of sight, more than 650 feet (200 m) beneath the crater floor. The lake sits in a vent, which is actually a pipe-like crater within the smaller crater called Halema'uma'u. And Halema'uma'u is also a crater within a crater — the giant Kilauea caldera, the bowl left behind when the volcano blew its top about 1500 A.D.

The USGS also reports that activity is up at Pu'u 'O'o crater, 12 miles (19 kilometers) from the summit in the volcano's East Rift Zone. The crater was awash with lava flows in recent days, and lava overflowed from its northeast lava lake and north spatter cone, the USGS said in a statement. At the coast, oozing flows continues to slowly drop into the ocean.

This month marks the 30th anniversary of the eruption at Kilauea's East Rift Zone. The volcano's longest continuous rift zone eruption since the 15th century, the massive upwelling has created more than 500 acres of new land.