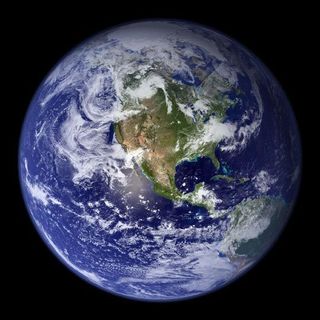 Americans are becoming more concerned about the reality of global warming, according to a new Gallup poll, though they're still not as worried about climate change as they have been in earlier years.

Fifty-eight percent of Americans say they worry a great deal or fair amount about global warming, up from 51 percent in 2011, but well below the 72 percent who said the same in 2000, according to Gallup.

The belief that people are contributing to the problem is also back on the rise, the survey found, with 57 percent of Americans saying global warming is caused by human activities, down from the high of 61 percent in 2007, but up from 50 percent in 2010.

A majority (54 percent) believes the effects of climate change are already taking hold, up from a recent low of 49 percent in 2011. And they're less cynical about the portrayal of global warming in the news. In 2010, 48 percent of Americans believed news about global warming was exaggerated, whereas 41 percent said the same this year. That's still higher than the long-term average of 36 percent, according to Gallup.

This year's survey found that 62 percent of Americans now believe scientists agree global warming is occurring. In 2008, 65 percent said the same, but that figure dropped to 52 percent in 2010. (In reality, most scientists agree the planet is warming and humans are the culprits.)

Why all the flip-flopping?  Gallup pollsters suspect peaks in Americans' concern about global warming (the late 1980s, the late 1990s, 2006-2008) might correspond with effective campaigning to raise awareness about the issue, such as the release of Al Gore's 2006 documentary "An Inconvenient Truth." Meanwhile, efforts by so-called global warming skeptics to sow doubt about climate change (recall the leaked "Climategate" emails of 2009) may have swayed public opinion at other times, particularly in the past few years.

After the 1997 Kyoto Protocol set targets for countries to reduce their greenhouse gas emissions, the issue has become quite polarizing along political lines. Those with conservative views tend to be more skeptical about climate change.

A recent study presented in December at the annual meeting of the American Geophysical Union found that conservatives are more likely to accept that humans are altering the climate when they're told that most scientists agree on the subject, rather than when they're presented with supporting scientific evidence.

The Gallup poll was based on telephone interviews conducted March 7-10, with a random sample of 1,022 adults, living in all 50 U.S. states and the District of Columbia. The polling agency estimated that the margin of error for the poll was 4 percentage points. The full results can be found on the Gallup website.