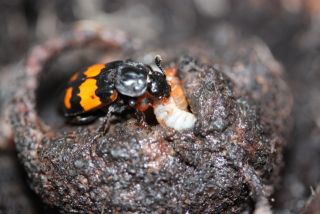 In the animal kingdom, cuckolded males will care for the offspring of interlopers unless female infidelity is common and caring carries a high cost, as with Burying Beetles.
(Image: © Per Smiseth)

No man wants to be cuckolded. But the males of many species actually stick around to raise offspring that aren't their own, so long as the effort doesn't cost them much, new research suggests.

An analysis of several animal studies found that males whose mates had strayed were, on average, 12 percent less likely to care for their offspring than other males. Even so, a high proportion of male animals care for offspring that may not have been theirs. They did so as long as the likelihood of cuckoldry was low and providing care would not harm the males' own future reproductive prospects. The findings were detailed March 26 in the journal PLOS Biology.

"The vast majority of species studied show some level of cuckoldry," study leader Charlie Cornwallis of Lund University, Sweden, told LiveScience. The question is, "why should those males continue caring when those offspring don't have their genes?"

Being a caring father takes work. By one estimate, the amount of effort a typical garden bird expends rearing chicks is the bird-equivalent of cycling the Tour de France. It stands to reason that male animals should only spend this much effort on their own offspring. Yet, bafflingly, research shows that males of many species continue to care for young they did not sire. [The Animal Kingdom's Most Devoted Dads]

Cornwallis and colleagues conducted a meta-analysis of 62 studies of paternity and parental care in 50 different species of insects, fish, birds and mammals. To explain why males care for offspring that someone else might have sired, the researchers considered factors such as whether the males were aware of the female philandering, the likelihood of cuckoldry and the cost of caring for non-biological offspring.

As the researchers wrote in the study, "Are cuckolded males that maintain care blissfully ignorant or selfless dupes?"

Perhaps neither, it turns out. Overall, males care for young from other males unless there's a high risk of being cuckolded, or providing care hurts a male's future prospects of producing his own offspring, the findings suggest.

The results showed a huge variation across species in how males responded to cuckoldry, or perceived cuckoldry. For example, male three-spined stickleback fish provide a high level of parental care because females are less promiscuous and caring for young carries little cost. Chacma baboons, by contrast, suffer rampant cuckoldry and have a lot to lose by caring for the offspring of other males.

Human males fall somewhere in between; they tend to provide less care for children they don't perceive as their own, but that reduction is "quite weak" compared with some other species, Cornwallis said.

Often, "males end up with a mixed bag of some of their offspring and some from other males," Cornwallis said. The cost of caring for those other offspring may be low, and if a male deserts them, he risks losing his own offspring, too.

The study reveals "the simple expectation that you shouldn't care for children that aren't your own is more complex than that," Cornwallis said.