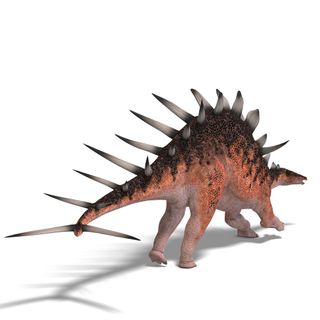 With long, sharp spikes down its back, a female Kentrosaurus was a mean piece of tail.
(Image: © Ralf Juergen Kraft / Shutterstock.com)

Birds do it, bees do it — but how did 3-ton dinosaurs with sharp, pointed spikes on their backs and tails get it on?

Very carefully, say some researchers, who believe mounting a female from behind would have proved deadly for the males of dinosaurs like Stegosaurus.

"The females could not raise their tails, because the bones at the top end were fused," Brian Switek, a dinosaur researcher and writer, told the Sunday Times. "Also, some species had lethal spikes on their backs, which would have been impossible to get past."

Apparently, Switek — whose new book is "My Beloved Brontosaurus: On the Road with Old Bones, New Science, and Our Favorite Dinosaurs" (Farrar, Straus and Giroux, 2013) — isn't the only researcher pondering the ins and outs of dinosaur sex.

Heinrich Mallison, a scientist at the Museum of Natural History in Berlin, has developed computerized models showing the numerous positions available to lusty dinosaurs.

His software models proved that the male Kentrosaurus (a relative of Stegosaurus) had a major obstacle to overcome; namely, castration by the female's sharp-spined back.

"These prickly dinosaurs must have had sex another way," Mallison told the Times. "Perhaps the female lay down on her side and the male reared up to rest his torso over her. Other species would have used different positions, like backing up to each other."

Sadly, no sex tapes exist to shed light on the sex lives of dinosaurs, but fossil evidence has revealed a few facts about their procreative habits. Research has found, for example, that dinosaurs were sexually active before reaching full physical maturity, not unlike human teenagers.

And a recent study suggests that dinosaurs — like their avian relatives — had feathered tails that they used in courtship displays to attract a mate.

But nobody really knows just how endowed male dinosaurs were, which makes questions about their sexual habits mere guesswork. Some experts have speculated that a large penis may have made the missionary position unnecessary for dino-copulation.

"A 33-foot long ankylosaurus with spikes and armor would have a 6-foot penis to bridge the gap when he got close to a female," John Long, professor of paleontology at Flinders University in Australia, told the Times.

Alas, no such fossils exist: "Soft tissues are seldom preserved during fossilization," Long said, "so we have never found a fossilized phallus, but doing so would solve many mysteries."