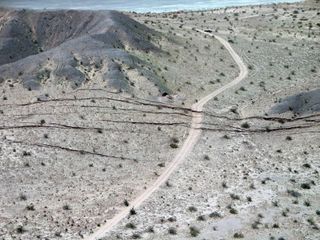 Ruptures along the trace of the magnitude-7.2 earthquake in Baja California, Mexico in 2010. The earthquake ruptured along a plate boundary, and is one of several which shows signs of foreshocks caused by slow movement prior to the earthquake, a new study finds.
(Image: © John Fletcher, CICESE)

After a destructive earthquake, scientists sifting through the rumbles that preceded the big event often find foreshocks.

Foreshocks are smaller temblors that strike in the days and hours before a moderate-to-large earthquake. They're puzzling. Not all earthquakes have foreshocks, and despite decades of effort, no one has successfully found a way to predict earthquakes using foreshocks.

Now, a new study may help explain some of the mysteries surrounding these enigmatic earthquakes.

At plate boundaries, the interface between two of Earth's tectonic plates, foreshocks result from slow, creeping movement between the two plates before big earthquakes rupture more rapidly, according to a study published today (March 24) in the journal Nature Geoscience. As the fault creeps, small, stuck zones resist this slow movement and eventually break, generating foreshocks, explained study co-author Virginie Durand, a graduate student in seismology at the Institute of Earth Science (ISTerre) in Grenoble, France.

Thus, foreshocks aren't triggers for earthquakes, as was once thought, Durand told OurAmazingPlanet. Instead, "these events can tell us how an earthquake begins," she said. "And if we understand better where and how earthquakes begin, we can better mitigate earthquake hazard."

For the study, Durand and her colleagues looked at earthquakes bigger than magnitude 6.5 along the edge of the Pacific Ocean, where Taiwan, Japan, the United States and Mexico operate dense seismic monitoring networks. Between 1999 and 2011, half of the earthquakes tested were on plate boundaries (22 subduction zone quakes and nine strike-slip) and half were so-called intraplate earthquakes. [Video: What Does Earthquake 'Magnitude' Mean?]

Subduction zones are collision zones between two plates, where one bends down and dives under the other. Strike-slip boundaries are where plates slide horizontally past one another. Intraplate quakes hit away from the massive faults that mark plate boundaries.

While the pattern for each plate boundary earthquake was unique, on average, the seismicity along the faults was nearly constant until about two months before a big earthquake, when there was a small but noticeable increase, the researchers found. Seismicity refers to the geographic and time distribution of earthquakes.

The increase became more pronounced about 20 days before the main event. Earthquake frequency continued accelerating about two days before, then a few hours before, and kept increasing until the final convulsion, the study found.

"This observation suggests that an earthquake is preceded by the slow slip of the two plates in contact," Durand said."If confirmed, the relatively long duration of this nucleation phase may help mitigate earthquake risk in the future."

There was no clear pattern in earthquakes away from plate boundaries, on the intraplate quakes, an observation that could help explain the puzzling lack of foreshocks for some earthquakes.

Future research will confirm whether the pattern is present in other earthquake zones around the world, and if monitoring faults for creeping movements and foreshocks could be used to forecast future earthquakes on certain types of faults. It's not known if the pattern also appears along faults when there are no earthquakes, the researchers point out.