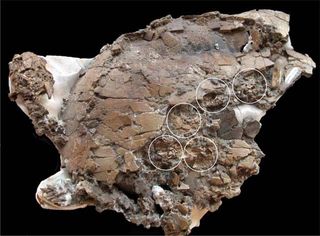 Features of the five crushed eggs discovered inside the fossil turtle's body cavity suggested the female turtle would have laid them in a matter of days.
(Image: © Darla Zelenitsky, University of Calgary.)

A turtle that toddled alongside the dinosaurs died just days before laying a clutch of eggs. Now, about 75 million years later, paleontologists are announcing their find of the fossilized mother-to-be and the eggs tucked inside her body.

Scientists from the Royal Tyrrell Museum of Palaeontology in Canada discovered the turtle in 1999 in a mud-filled channel in the badlands of southeastern Alberta. Then, in 2005, University of Calgary scientists found a nest of 26 eggs laid by another female of the same species in the same region.

Both specimens, described this week in the journal Biology Letters, belong to an extinct turtle in the Adocus genus, a large river turtle that resembles today's slider and cooter turtles.

The pregnant turtle represents the first fossil turtle to be unearthed with eggs still inside the body cavity, the scientists say.

"Although it is relatively rare to find the eggs and babies of extinct animals, it is even rarer to find them inside the body of the mother," said researcher Darla Zelenitsky, a geoscientist at the University of Calgary in Alberta, who was also involved in the first discovery of a dinosaur with eggs inside its body.

It was almost by accident that scientists realized that the fossil turtle had been pregnant.

"The reason we knew she was pregnant was because when the fossil was found the body was broken," Zelenitsky told LiveScience, "so there was egg shell on the ground just below the fossil, it was falling out of the body."

The team spotted at least five crushed eggs within the body of the fossilized female, and computed tomography (CT) scans revealed more eggs hidden beneath the turtle's shell. The turtle, estimated to be about 16 inches (40 cm) long, could have produced about 20 eggs.

When still intact, the eggs would have been spherical and about 1.5 inches (4 cm) in diameter. The eggs from the nearby nest were about the same size and shape. Both sets of eggs also had extremely thick and hard shells, especially compared with most modern turtles whose shells are either thinner or soft.

The thick eggshell may have evolved to protect the eggs from drying out or from voracious predators that lived during the Age of Dinosaurs.

The pregnant turtle and nest specimens, the researchers say, shed light on the evolution of reproductive traits of modern turtles.

"Based on these fossils, we have determined that the ancestor of living hidden-necked turtles, which are most of today's turtles and tortoises, laid a large number of eggs and had hard, rigid shells," said François Therrien, the Museum's Curator of Dinosaur Palaeoecology, who worked on the turtle report in the journal.