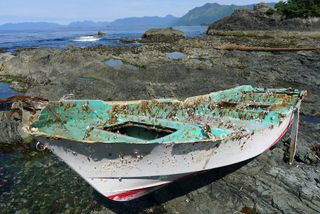 In this photo released by NOAA, a boat lost in the Japanese tsunami of 2011 sits onshore on a remote Canadian island. The boat was discovered Aug. 9, 2012.
(Image: © Kevin Head)

Two years after a deadly tsunami swept ashore in Japan, killing more than 15,000 people, solemn reminders of the disaster are still washing ashore in Hawaii and along the Pacific coast of North America.

The tsunami debris, sometimes identifiable by serial numbers, includes boats, docks, appliance parts and fishing buoys. Though harder to trace back to a particular source, an uptick in Styrofoam and housing materials may also originate from the March 2011 wave.

"This has been a very unprecedented event," said Nancy Wallace, the director of the marine debris program at the National Oceanic and Atmospheric Administration (NOAA). The agency has been tracking the debris, which can pose a navigation hazard to boats and an entanglement or choking hazard to wildlife. The process has given scientists a better understanding of how debris travels, Wallace told LiveScience, but no one knows how much is yet to come ashore.

So far, NOAA has confirmed 21 pieces of debris from the Japan tsunami on U.S. shores. The most recent piece, confirmed by the Consulate of Japan on Feb. 5, was a large, yellow buoy found off the Hawaiian island of Kauai. (The agency has received more than 1,000 debris reports, but many items cannot be definitively linked to the tsunami.)

Other confirmed items that have washed up include a soccer ball in Washington State, a 35-foot (11 meters) steel tank in British Columbia and multiple small, derelict boats.

Two floating docks beached themselves in Washington and Oregon, both harboring massive amounts of marine life and requiring decontamination to prevent invasive species from establishing themselves on the U.S. coastline. [Images: Beached Japanese Dock]

Sometimes, a sudden influx of a particular item strongly suggests that it is tsunami-related, even in the absence of other evidence. Styrofoam and other housing materials, for example, have been showing up in bulk in Alaska and Hawaii, said Nicholas Mallos, an ocean debris specialist at the non-profit Ocean Conservancy.

"Styrofoam has shown up in some places in quantities 30 times historical abundances," Mallos told LiveScience.

The debris slowly making its way across the Pacific to North America is only a fraction of the estimated 5 million tons of rubble and other materials swept into the sea by the tsunami, according to Japanese government estimates. Approximately 70 percent of the debris sunk off of Japan's coast, leaving 1.5 million tons to float across the ocean. How much of that is still floating is anybody's guess. [Tracking Tsunami Debris (Infographic)]

NOAA works with fishing vessels and commercial shippers, relying on eyewitness reports of debris in the open ocean. Early on, Wallace said, the agency tried to monitor the debris by satellite, but soon found that the material wasn't visible for very long. As the debris fields dispersed and some of it sank, the remaining pieces were too small to see from orbit.

Models of debris flow have proved more useful, though the motion of the matter depends heavily on wind and water currents. Using historical climate data, scientists can make an approximation, Wallace said, but the models were greatly improved when researchers put the real-world current and wind conditions into the system. Unfortunately, that means that while researchers are good at telling where the debris is likely located now, they're not as clear on where it's going.

Humans dump massive amounts of debris into the ocean on a regular basis, the Ocean Conservancy's Mallos said. There are no good numbers on what percentage of the debris currently in the sea comes from the tsunami versus from everyday garbage and abandoned fishing gear. Working to reduce this everyday junk, by decreasing consumer waste, for example, will make the oceans more resilient in the face of unavoidable debris disasters like tsunamis, Mallos said.

Another thing researchers don't know: the impact of all that debris that may never reach shore.

"Very little research has been done at mid-water depths, and particularly on the seafloor, as to what extent of debris abundance is there and what particular ecological impacts debris has on those marine environments," Mallos said.

Meanwhile, experts expect trickles of tsunami debris to continue to wash onto American shores for the next few years.

"Things can get caught up in eddies and gyres for awhile and then get spit out, so it could really be years that the debris is out there," Wallace said. "We hope that we've seen most of it, but it's just so hard to tell."