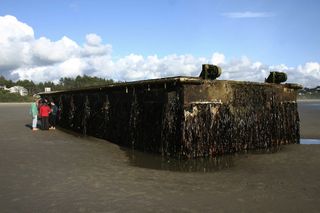 The dock that washed ashore in Oregon is 66 feet long and covered with an estimated ton of marine life.
(Image: © Oregon Department of Parks and Recreation)

A Japanese dock that ripped from its moorings during the 2011 Tohoku earthquake and tsunami and washed ashore in Oregon this week brought with it an estimated 100 tons of sea life.

Oregon State University (OSU) scientists said Thursday that there are about 13 pounds of organisms per square foot on the 66-foot-long dock, which has been traced to the Northeast coast of Japan. Tests show that the dock is not contaminated with radiation from the Fukushima nuclear plant meltdown after the tsunami, but it did bring with it the danger of invasive species.

"This float is an island unlike any transoceanic debris we have ever seen," John Chapman, an OSU marine invasive species specialist, said in a statement. "Drifting boats lack such dense fouling communities, and few of these species are already on this coast. Nearly all of the species we've looked at were established on the float before the tsunami; few came after it was at sea." [Images: Japanese Tsunami Dock On Shore]

Estimates from the Japanese government and NASA suggest the monstrous tsunami swept up 5 million tons of debris, with about 70 percent sinking to the seafloor; the rest (1.5 million tons), like this huge dock, have been floating across the ocean. And although tsunami debris has likely been washing up on the west coast for months, the researchers were shocked to see such a rich raft of life make it all the way across the open Pacific, where food is scarce, to Newport, Ore.

"It is as if the float drifted over here by hugging the coasts, but that is of course impossible," Chapman said. "Life on the open ocean, while drifting, may be more gentle for these organisms than we initially suspected. Invertebrates can survive for months without food and the most abundant algae species may not have had the normal compliment of herbivores. Still, it is surprising."

Oregon state officials are organizing volunteers to scrape the dock clean of the organisms, which will be bagged and disposed of. Many of the species are not native to Oregon's shores, and could damage the state's ecosystem if they become established there.

For example, a brown algae called Undaria pinnatifida was present over much of the dock, according to Jessica Miller, an ecologist at Oregon State. The algae is native to the western Pacific, but has established itself in southern California.

"To my knowledge it has not been reported north of Monterey, Calif., so this is something we need to watch out for," Miller said in a statement.

Likewise, small shore crabs found on the dock are similar enough to ones that live in Oregon that they could find a home on the state's coast. Oysters, clams, limpets, snails, musssels, sea stars and worms could also move in, Miller said.

These little creatures can have a big impact. The invasive zebra mussel, for example has grown so densely in some lakes and streams in the United States that no other species can survive. They even clog intakes for drinking water and for hydroelectric companies.

It's too soon to say whether any of the species on the dock bailed before reaching the beach, according to the Oregon State biologists.

"We have no evidence so far that anything from this float has established on our shores," said Chapman. "That will take time. However, we are vulnerable. One new introduced species is discovered in Yaquina Bay, only two miles away, every year. We hope that none of these species we are finding on this float will be among the new discoveries in years to come."