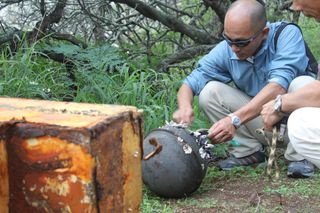 Researchers examine a buoy and refrigerator traced to the 2011 Japan tsunami. Debris like this is not normally seen in Hawaii, but the tsunami has sent a number of unusual items across the Pacific.
(Image: © Nicholas Mallos)

Oyster buoys and refrigerator parts set adrift by the 2011 Japan tsunami are now rolling in with the tide on Hawaii's beaches, a new field survey reveals.

Black oyster buoys and refrigerator parts — and even a full refrigerator — that trace back to Japan have shown up on the islands of Oahu and Kauai, said Nicholas Mallos, a conservation biologist and ocean debris specialist at the nonprofit Ocean Conservancy. Also on Oahu, researchers found a large 4-foot by 4-foot (1.2 by 1.2 meters) chunk of housing insulation framed in wood, a piece almost certainly sent into the sea by the devastating tsunami.

"These items have never before been seen on these beaches," Mallos told LiveScience.

The Japanese government has estimated the tsunami, which was triggered by an underwater earthquake in March 2011, swept about 5 million tons of wreckage out to sea. While 70 percent appears to have sunk offshore, the rest is floating in the Pacific Ocean. The first bit to show up in Hawaii, in September, was a barnacle-covered seafood storage bin.

Exposed to ocean currents on every side, the Hawaiian Islands are a hotspot for Pacific junk. Some of this ocean litter originates from the fishing industry; most of the rest is consumer garbage from soda bottles, toys and other plastic goods, much broken down by the waves beyond recognition. [In Photos: Tsunami Debris & Ocean Trash in Hawaii]

At Kimalo Point on Hawaii's Big Island, tiny fragments of plastic penetrate as much as 3 feet (0.9 meters) below the beach surface.

"Many places on the beach, it's hard to differentiate the sand from the plastics on the surface," Mallos said.

The tsunami debris is different. For one thing, it tends to be larger, having only been in the ocean since March 2011, Mallos said. The debris also comes ashore in surprisingly homogenous waves. This summer, it was oyster buoys, Mallos said. Now, it's refrigerator parts.

The reason? Wind acts on similar objects in similar ways, according to research by Nikolai Maximenko of the University of Hawaii at Manoa's International Pacific Research Center. All of the tsunami debris went into the ocean at the same time, but some objects drift across the Pacific faster than others. That results in clusters of similar objects showing up in Hawaii and along the North American West Coast at the same time. [Tracking Tsunami Debris (Infographic)]

Mallos and colleagues from the Japan Environmental Action Network, the Oceanic Wildlife Survey and the Japan Ministry of the Environment just completed a beach survey in Hawaii in search of this tsunami debris. They found about six or seven items, including the rusted Japanese refrigerator and buoys, which very likely came from the tsunami, Mallos said.

"We're not seeing a massive wave of debris wash onto the shore at one time, but right now, what it's been is a slow accumulation of debris here and there," he said.

The tsunami debris is a problem, but it's part of a much bigger issue, Mallos said. Hawaii is awash with plastic trash from all over the world; the islands also neighbor the Great Pacific Garbage Patch, an area of the North Pacific where currents push masses of plastics into a suspended gyre of trash. Long story short: The oceans are a mess.

The Hawaii survey turned up masses of this typical ocean garbage, including fishing nets and traps, Mallos said. One of the stranger items was an intact plastic trashcan from Los Angeles County with "Heal the Bay" stickers on it. Heal the Bay is a nonprofit group that works to clean up California's Santa Monica Bay. In an unfortunate irony, one of the group's trashcans got into the ocean and floated some 2,500 miles (4,023 kilometers) to end up on a beach in Hawaii.

The average person can do their part to reduce ocean trash, Mallos said. Because consumer plastics are a huge part of the problem, resolving to use reusable grocery bags, coffee mugs and water bottles can keep one-time use plastics out of the oceans. The Ocean Conservancy has developed a free app, called Rippl, designed to nudge users into a more ocean-friendly routine by reminding them to take those sorts of small actions.

The problem of typical ocean trash is inextricably linked to the issue of tsunami debris, Mallos said. Tsunamis aren't preventable, but regular ocean litter is, he said.

"To the extent we can keep regular forms of ocean trash out of the ocean, in the face of disasters, the ocean becomes more resilient and better equipped to deal with the debris," he said.

The new survey was funded by the Environmental Restoration and Conservation Agency of Japan.