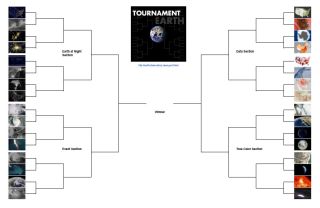 March Madness is coming, and if you care more about solar flares than foul shots or would sooner bet on a real cardinal than the Louisville Cardinals, then you have some alternative brackets to take part in this month.

"March Madness is happening just when all the birds are starting to return from Central and South America, and it's a really exciting time for a bird watcher," said Hugh Powell, a science editor at the Cornell Lab of Ornithology in Ithaca, N.Y., which is holding its third annual Migratory Madness bracket.

The tournament was born out of lab staff members' conversations about picking their favorite birds, Powell told OurAmazingPlanet. (It's sort of like the endless conversations kids can have around questions like, "If Superman and Batman got into a fight, who would win?" he said.)

The 16 feathered-contenders won't be announced until Monday, and the eventual winner will have to survive four rounds of public votes. The entrants were chosen largely through polls on the Facebook pages of Cornell's various citizen science projects, including Project FeederWatch, which encourages people to send in tallies of the birds they spot at their feeders during the winter months.

Powell said there might be some surprises thrown into the mix this year (maybe even some mammals chosen by Cornell's other labs), and there should be a couple of endangered species, including the whooping crane (Grus americana), North America's tallest bird.

Powell said more common birds typically get a lot of votes, but the tournament has seen some "incredible upsets." Last year, a surprising spike in snowy owl sightings across America sent the stately bird into the top spot, and in 2011 the diminutive black-capped chickadee edged out heavyweights like the red-tailed hawk.

Once the contest is live, you will find a link to the bracket on the lab's Facebook page.

This year marks the 40th anniversary of the Endangered Species Act, which protects the nation's plants and animals that are threatened with extinction, and NOAA Fisheries is commemorating the law with its tournament of 16 endangered sea-dwelling creatures.

Round 1 of the bracket runs until Sunday (March 10); you can cast votes to decide which of your favorite competitors —Blue whale or Guadalupe fur seal? Right whale or olive ridley turtle? —gets to move on.

The list also includes some less charismatic species, like the bottom-feeding Gulf sturgeon, Johnson's seagrass and the white abalone, a tough-shelled large sea snail found off the west coast of Mexico and California. NOAA's site quotes the abalone: "I may look like a 6-inch-long oval shell with a single orange foot poking out, but there's a lot more to my story than my good looks. I'm actually the first marine invertebrate to make it onto the Endangered Species Act. Before me, everyone on the list had a spine!"

NASA Earth Observatory is also getting on board with March Madness through its own tournament of remote-sensing science.

"They are the best Earth images of the year, the top 32 from 2012. But which ones will be good enough to survive head-to-head competition?" the Earth Observatory asked on its site.

The field of two-dimensional competitors has been split up into four categories: Earth at night, events, data and true-color. Rivalries include satellite shots of Hurricane Isaac in the Gulf and Hurricane Sandy covering much of the Northeast, as well as images of New Zealand's Mount Tongariro erupting and a new volcanic island forming in the Red Sea.

The entrants also include an image of the sun during an intense January 2012 solar flare, a Black Marble nighttime view of the entire planet and a picture snapped by an astronaut aboard the International Space Station showing an elusive red sprite, an ultrafast burst of electricity that hovers for just a few milliseconds above thunderstorms.

Voting will take place each week, with the first round ending today (March 8) at 4:00 p.m. ET.