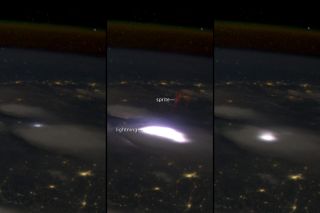 A strange type of lightning called a sprite that occurs above thunderstorms and extends to the edge of space was photographed by an astronaut aboard the space station on April 30th, 2012.
(Image: © NASA Earth Observatory)

Near the edge of space, sprites and elves dance, but there's nothing mythical about them.

Sprites and elves are reddish, ultrafast bursts of electricity that are born near the edge of space, about 50 miles (80 kilometers) up in the atmosphere. Sprites are jellyfish-shaped, starting as balls of light that stream downward, whereas elves take the shape of ring-like halos.

One sprite was captured with a digital camera by Expedition 31 astronauts aboard the International Space Station as it traveled over Myanmar on April 30.

Scientists first captured images of sprites and elves dancing above thunderstorms in the late '80s and early '90s. Pilots actually saw them decades earlier, but since they flicker in and out of existence so quickly, the sightings couldn't be verified.

Sprites are difficult to observe because they last for just a few milliseconds and occur above thunderstorms, meaning they are usually blocked from view on the ground by the very clouds that produce them. They send pulses of electrical energy up toward the edge of space — the electrically charged layer of the atmosphere known as the ionosphere — instead of down to Earth's surface.

But with their top-down view of the atmosphere, astronauts have a perfect vantage point from which to observe red sprites. Viewers on the ground can occasionally photograph sprites by looking out on a thunderstorm in the distance, often looking from high mountainsides over storms in lower plains to gain a height advantage, according to a statement from NASA's Earth Observatory.