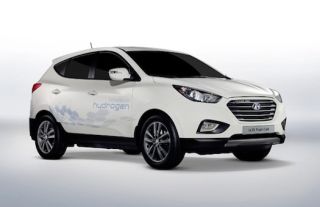 But take the newest Hyundai out for a spin, and you'll discover it's whisper-quiet — because it has no engine. Instead, the vehicle runs exclusively on hydrogen fuel cells, and produces only water vapor as exhaust.

The cars seem destined for the European auto market: The EU has already started building a network of hydrogen refueling stations throughout the continent, the New Zealand Herald reports, and Hyundai has inked a deal with the city of Copenhagen, Denmark, to supply a fleet of 15 ix35s.

Hydrogen as fuel isn't a new idea. In his 1874 novel "The Mysterious Island," science fiction master Jules Verne predicted the rise of hydrogen as an energy source. Hydrogen also fueled NASA's space shuttles and the Apollo modules that took U.S. astronauts to the moon.

Hydrogen fuel systems work by combining compressed hydrogen gas with oxygen; the combination of those two elements produces an electrical charge. The only byproduct is water, which hydrogen-fuel cars emit as water vapor or a small trickle of water.

Because of the dearth of hydrogen fueling stations, the use of hydrogen-powered vehicles makes the most sense in vehicles that return to the same spot each night, like government fleets, Bloomberg.com reports. Cities like Basel, Switzerland, and Flint, Michigan, have experimented with hydrogen-fueled vehicles.

But the cost remains prohibitive, even for government buyers. The ix35, which Hyundai plans to market to consumers in 2015, is expected to come with a price tag in excess of $100,000, US News reports.

As these vehicles grow in popularity, however, that price tag may get smaller and smaller. "The costs of fuel cell systems alone have, over the past few years, dropped by a factor of 10," according to a news release from Empa, a European research institution, "and the end of this trend is not yet in sight."