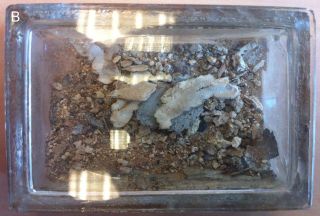 The heart of Richard the Lionheart was preserved with mercury, mint and frankincense, among other sweet-smelling plants, a new study finds.

The study is the first biochemical look at the heart of Richard I, who died in 1199. As was common practice at the time, the king's heart was removed and mummified separately from the rest of his body. It rested in a reliquary at Notre Dame in Rouen for centuries before its rediscovery in 1838.

Now, for the first time, the chemical composition of the substances used to preserve the heart has been revealed. These substances were directly inspired by Biblical texts, said study leader Philippe Charlier of University Hospital R. Poincaré.

"The aim was to approach the odor of sanctity," Charlier told LiveScience.

The life and death of Richard I

Richard I of England began his rule in 1189. He spent two years in captivity in Europe, much of that time being held for ransom by the Holy Roman Emperor. Later, the tale of Richard I's ransom would be folded into folk tales about Robin Hood, casting Richard I as a benevolent absent monarch and his brother John as a tax-happy usurper.

(Richard I came centuries before Richard III, the English monarch whose bones were discovered in a Leicester parking lot in September 2012. Richard III died in 1485.)

On March 25, 1199, years after the kidnapping, Richard sustained a crossbow wound in Chalus, France, and died 12 days later of gangrene. His abdominal organs were removed and interred in Chalus, while his body went to rest at Fontevraud Abbey in France. His heart was embalmed and placed in its own casket and taken to Notre Dame in Rouen. [The 10 Weirdest Ways We Deal With the Dead]

This division of the body was used to symbolize and mark Richard I's territory, Charlier said. However, no ancient texts remain to record how the embalming process was done.

The heart rested in Rouen until July 1838, when a local historian discovered a lead box inscribed, "Here is the heart of Richard, King of England." The heart itself had been reduced to dust in the preceding centuries; all that the box contained was a brownish-white powder.

It was this powder that Charlier and his colleagues tested. They found a variety of compounds, including traces of the proteins found in human heart muscle. They also observed tiny fragments of linen, suggesting that the heart was wrapped before placement in the box.

Some metal compounds, including lead and tin, likely seeped into the powder from the lead box. Others were probably used in the embalming process. In particular, the researchers detected mercury, which has been found in other medieval burials and was probably used as an embalming agent.

The analysis also turned up pollen from a variety of plants: myrtle, daisy, mint, pine, oak, poplar, plantain and bellflower. Some of these, including poplar and bellflower, would have been blooming in April when Richard the Lionheart died; their pollen may have simply settled out of the air into the casket.

Other plants were probably used to preserve the heart. Myrtle, daisy and mint would not have been in bloom at the time, the researchers found, and probably would have been part of the embalming process. Frankincense, a tree resin, would also have been useful for both its preservation and its symbolic properties.

"This symbolic substance appeared at both extremities of the Christ life," the researchers write online today (Feb. 28) in the journal Scientific Reports. "Presented by the Biblical Magi at His birth, and used during His external embalming after the Passion."

Preserving the heart would have been important, because the journey to Rouen from Chalus was about 330 miles (530 kilometers), the researchers wrote. But Richard I's contemporaries may have also seen the process as one of "theological transformation," Charlier said.

Indeed, contemporary wisdom seems to have held that Richard I needed all the spiritual help he could get. In the 1200s, the bishop of Rochester announced that the king had only made it to heaven in 1232, having spent the intervening 33 years in purgatory, repenting his Earthly sins.