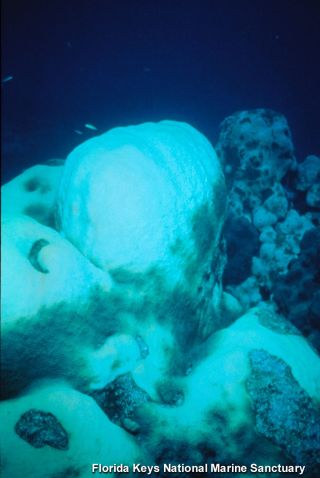 Coral bleaching is a growing phenomenon for coral reefs globally. It is caused by the expulsion of the symbiotic algae, zooxanthelle, from the coral polyps. The zooxanthelle gives the coral its color and is also the source of most of the coral's nutrients. Coral can survive for a short time without the zooxanthelle, but if the algae remain expelled for an extended period of time, the coral will die.
(Image: © Credit: Florida Keys NMS)

The world's coral reefs could be in trouble by the end of the century, or much sooner if nothing is done to curb carbon emissions, researchers say. Due to warming oceans, a distressing experience for corals known as bleaching threatens to become an annual occurrence for most reefs, a new report warns.

Corals are reef-building animals that host algae within their tissues; the tiny plants, in turn, provide corals with food and color them brilliantly. But climate change may disrupt this symbiotic relationship for many species, researchers say.

Higher than normal ocean temperatures can overwhelm the algae's photosynthesis, making light toxic instead of nourishing for the tiny plants. This prompts corals to kick out their guests and turn white; the phenomenon, called coral bleaching, puts the animals under great stress.

Most reefs can recover from about two mass bleaching events per decade, researchers say. But as the atmosphere becomes more and more carbon-heavy and drives up ocean temperatures, bleaching could occur on a yearly basis for many reefs, possibly meaning mass die-offs for corals that can't adapt quickly enough, according to the report appearing this week in the journal Nature Climate Change. [Stressed Coral: Photos of Great Barrier Reef ]

The researchers looked at how 1,707 coral reef locations would be affected under four different projections of rising carbon concentrations in the atmosphere over the century, as outlined by the Intergovernmental Panel on Climate Change (IPCC). Carbon dioxide is a greenhouse gas that traps heat in our atmosphere.

All coral reefs will experience a yearly bleaching event by 2056 if carbon emissions keep increasing as aggressively as they have been, with more fossil fuels being burned and no efforts at emissions stabilization, the researchers found. Even under the IPCC's best-case scenario, in which CO2 emissions are curbed significantly, 95 percent of reef locations will experience annual bleaching conditions by the end of the century, according to the study.

That's not to say the situation is hopeless. Cutting carbon emissions even modestly could at least slow the onset of annual bleaching, giving corals time to adapt, the researchers say.

"For 394 reef locations (of 1,707 used in the study) this amounts to at least two more decades in which some reefs might conceivably be able to improve their capacity to adapt to the projected changes," Maynard added in a statement. "More so than any result to date, this highlights and quantifies the potential benefits for reefs of reducing emissions in terms of reduced exposure to stressful reef temperatures."

Reefs that are expected to experience annual bleaching earlier than average should become conservation priorities, the researchers say. These high-risk locations include reefs in northwestern Australia, Papau New Guinea and some equatorial Pacific islands like Tokelau.

Meanwhile, the maps drawn up in the report showed some potential temporary refuges — including reefs in the western Indian Ocean, Thailand, the southern Great Barrier Reef and central French Polynesia — where bleaching is expected to occur later than average.

It's not yet known how corals might be able to adapt to more frequent bleaching so that they could survive in a warmer climate, said study researcher Ruben van Hooidonk, of the National Oceanographic and Atmospheric Administration's (NOAA) Atlantic Oceanographic and Meteorological Laboratory.

"We do know that some studies have shown that bleaching not always leads to mortality and that sometimes bleached corals recover with a different type of symbiont, one that can have a higher tolerance for temperature anomalies," van Hooidonk told LiveScience in an email.

"Another possibility is that bleaching kills more sensitive corals and therefore the remaining population will have a higher tolerance for temperature stress," the researcher added. "But both these phenomena are technically not adaptation."

Coral reefs provide habitats not only for algae, but for an abundance of fish, and they are critical to the survival of both rare and commercially valuable species. Reefs can also help buffer low-lying coastal areas from erosion and the effects of storms. Last year, NOAA proposed listing 66 varieties of coral under the Endangered Species Act, which would bolster protections of the animals in U.S. waters.