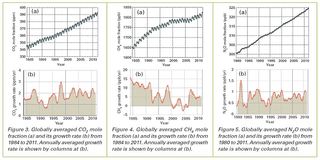 These charts show the concentrations and growth rates of atmospheric carbon dioxide, methane and nitrous oxide from 1984 to 2011.
(Image: © WMO)

The concentration of greenhouse gases in the atmosphere hit a record high in 2011, the United Nations' World Meteorological Organization (WMO) reported Tuesday (Nov. 20).

The international body estimates that about 413 billion tons (375 billion metric tons) of carbon have been released into the atmosphere since 1750, primarily from fossil fuel combustion. About half of this atmospheric carbon dioxide remains in the atmosphere, and much of it will linger for centuries, causing the planet to warm further, WMO Secretary-General Michel Jarraud warned.

Historically, the Earth's oceans and forests have helped balance the atmosphere's carbon equation by sucking up large amounts of the greenhouse gas. But Jarraud said natural carbon sinks might not be able to mitigate the problem as effectively in the future.

"Until now, carbon sinks have absorbed nearly half of the carbon dioxide humans emitted in the atmosphere, but this will not necessarily continue in the future," Jarraud said in a statement. "We have already seen that the oceans are becoming more acidic as a result of the carbon dioxide uptake, with potential repercussions for the underwater food chain and coral reefs. There are many additional interactions between greenhouse gases, Earth's biosphere and oceans, and we need to boost our monitoring capability and scientific knowledge in order to better understand these."

Greenhouse cases trap heat within the Earth's atmosphere and create a warming effect on the climate known as radiative forcing. From 1990 to 2011, radiative forcing by greenhouse gases shot up 30 percent, with carbon dioxide blamed for about 80 percent of this increase, according to the National Oceanic and Atmospheric Administration (NOAA).

Besides carbon dioxide, methane (CH4) and nitrous oxide (N2O) are also implicated in the greenhouse effect. In 2011, the level of methane in the atmosphere reached a new high of about 1,813 parts per billion, or 259 percent of the pre-industrial level, due to increased emissions from human activities, such as cattle breeding, rice farming and fossil fuel use. The atmospheric concentration of nitrous oxide, meanwhile, hit about 324.2 parts per billion last year, or 120 percent of the pre-industrial level and 1 part per billion above the 2010 level.