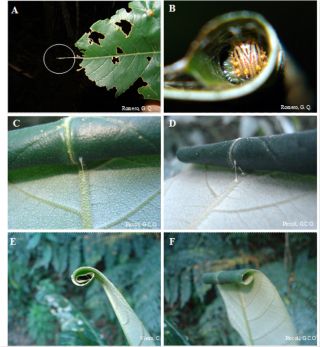 A leaf-rolling caterpillar so small it hasn't developed the need for the protective shelter yet is seen here in image A. In image B, a caterpillar sits inside its shelter. The rolled-up leaf shelter can be seen in images C and D, and is abandoned in images E and F.
(Image: © Romero, Piccoli, Vieira.)

Leaf-rolling caterpillars, widely considered pests in many parts of the world, actually play a crucial role in forest ecosystems by building shelters used by hundreds of other insect species, a new study says.

Caterpillars of the genus Anaea are the larvae of leafwing butterflies (so named because their wings mimic dead leaves). They protect themselves while caterpillars by rolling themselves up in a leaf — like rolling a cigar. They secure the leaf with a bit of silk they produce.

But these caterpillars aren't just building temporary shelters for themselves, it turns out.

Anaeaonly uses the leaf shelter for a week or so, but the leaves can stay rolled for up to a year, and that leaves plenty of time for other arthropods (a group of invertebrates that includes spiders) to take advantage. The new study, accepted to the journal Ecology, found that these leaf shelters are home to more than a dozen orders of arthropods. [Microscopic Monsters: Gallery of Amazing Bugs]

Camila Vieira, an ecology postgraduate at the University of Campinas in São Paulo, Brazil, and biologist Gustavo Romero sampled rolled and non-rolled leaves from 67 Croton floribundus plants (a favorite of the caterpillars) in the Biological Reserve of the Serra do Japi in southeastern Brazil. They also rolled their own leaves and checked on them every 15 days. The results were clear: During the dry season, from June to September, the number of insect and arthropod species on the rolled leaves was nine times greater than the number of species found on flat leaves. Even during the rainy season (December to March), there were five times more species on rolled leaves than on flat ones.

"The entire arthropod community hosted on Croton floribundus plants are influenced by leaf-rolling caterpillars," Vieira told OurAmazingPlanet in an email.

Overall, on the rolled leaves, the researchers found more than 9,000 arthropods from 433 species. During the dry season, the rolled leaves on 60 plants in the Brazilian forest played host to more than 3,000 bugs alone, including spiders, beetles, whiteflies, crickets and many, many caterpillars — even other Anaea, who seemed to be taking advantage of the pre-existing leaf so as to not have to construct their own.

Vieira and Romero think that the rolled leaves serve as "micro-environments" that protect arthropods from harmful ultraviolet radiation and from drying out. Since leaf-rolling caterpillars are everywhere in tropical forests, they say, these caterpillars — and their temporary homes — are a crucial part of the ecosystem.