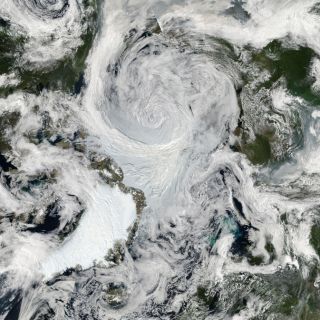 The scene of the crime: The Arctic.

The suspect: The Great Arctic Cyclone of August 2012.

The victim: The Arctic sea ice, which melted to a record low area last year.

"The Great Arctic Cyclone of August 2012" arose in Siberia on Aug. 2 and crossed the Arctic Ocean to Canada, lasting an unusually long 13 days. The cyclone hit a pressure minimum of 966 millibars on Aug. 6, the lowest ever recorded for an Arctic storm. The stronger the pressure gradient, or difference in pressure, the stronger the winds associated with a storm.

After the storm, which was equal in strength to a hurricane, tore across the Arctic, scientists have wondered whether its winds and waves were a guilty party in the disappearing Arctic sea ice.

Guilty or not guilty?

To solve the mystery, climate scientists from the University of Washington performed the equivalent of a forensic exam: They ran a computer simulation of last summer's weather and compared it against a second scenario that was identical, except that there was no cyclone.

"The storm was enormous," study co-author Axel Schweiger, a polar scientist in the university's Applied Physics Laboratory, said in a statement. "The impact on the ice was immediately obvious, but the question was whether the ice that went away during the storm would have melted anyway because it was thin to begin with."

Though the storm had a huge impact on sea ice while it passed, within two weeks, the effect diminished, lead author Jinlun Zhang, also a scientist in the university's Applied Physics Laboratory, said in the statement.

The final verdict? Not guilty

The scientists conclude the cyclone reduced the final September ice extent by almost 60,000 square miles (150,000 square kilometers), an additional 5 percent. However, they point out that 2012's record loss was 18 percent greater than the previous low, set in 2007. [Video: Powerful Arctic Cyclone Wreaks Havoc on Sea Ice]

"Thus without the storm, 2012 would still have produced a record minimum," the authors report in their study, which appears online this week in the journal Geophysical Research Letters.

The research also revealed an unusual mechanism for the cyclone-related melting. A study published Dec. 15, 2012, in the same journal focused on winds breaking up the ice or driving ice floes into areas of warmer water.

But the University of Washington team found that during the storm, the ice melted largely from warm ocean water churned up by the passing storm. Melting quadrupled during the storm, and the rate of ice loss doubled, the study found.

In the Arctic summer, ocean water becomes stratified from melting ice, according to a statement from the university. A layer of ice-cold fresh watersits just beneath the sea ice. But about 65 feet (20 meters) below the surface, there is a layer of denser, saltier water that has been gradually warmed by the sun's rays.

When the cyclone swept over the drifting ice floes, underside ridges churned up the water, bringing sun-warmed seawater to the ice's bottom edge and causing it to melt, the study suggests.