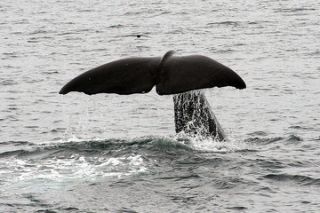 Ambergris is made in the digestive tract of the sperm whale.
(Image: © Richard Giddins / Flickr)

What's yellowish-gray, stinks to high heaven and is worth tens of thousands of dollars per pound?

Just ask Ken Wilman, whose dog Madge went nuts over a dirty old rock the pair found on a lonely, windswept beach near Morecambe, England. But it wasn't actually a rock: "When I picked it up and smelled it, I put it back down again, and I thought 'urgh,'" Wilman told the BBC.

Wilman didn't think much of the strange blob until he got home and, like any enterprising treasure hunter, immediately did a Google search. The chunky object, Wilman learned, was probably a valuable piece of ambergris, which comes from the digestive tract of the sperm whale and is a very expensive ingredient in luxury fragrances such as Chanel No. 5, the Huffington Post reports.

Realizing the foul stench emitted by the lump was actually the scent of money, Wilman sprang into action. "When I saw how much it could be worth, I went back to the beach and grabbed it!" Wilman told the Metro.

One French ambergris dealer has already offered Wilman $68,000 for his beach find, though it's probably worth much more. "It's quite a find," Chris Hill, curator at the Aquarium of the Lakes in Cumbria, England, told the Mirror.

"There are places in Europe that will buy it from you," Hill said. "They will age it, like a fine wine, and then test it for perfume. "How much it's worth will depend on how fresh it is, but it's potentially $180,000."

Despite the centuries-old passion for ambergris, nobody's really certain how the sperm whale produces it, or how the whale excretes the lump.

Most experts agree that whales create ambergris inside their intestines as a kind of fatty coating around sharp, hard-to-digest items, like the beaks of giant squid (a favorite food of the whale), the BBC reports. And squid beaks have been found inside pieces of ambergris.

But while some reports call ambergris "whale vomit," others insist it's not puke. "It's poop," molecular biologist Christopher Kemp told ABC News.

Kemp, the author of "Floating Gold: the Natural (and Unnatural) History of Ambergris" (University Of Chicago Press, 2012), notes that the stuff commands a high price because "only one percent of the 350,000 sperm whales can actually make it," he told ABC News. "Because it's so rare, it's very valuable."

Fearing a flood of fortune hunters looking for ambergris, local authorities in Morecambe are now warning beachcombers of some potential risks involved in their search.

"The tide comes in so very quickly that it catches people unaware," Mike Guy, manager of lifeboat operations for Morecambe, told the BBC. "We're really worried about people just wandering off on the beach searching for ambergris. They're very, very unlikely to find any because it's very rare."