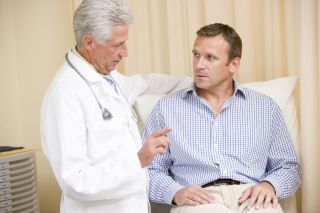 The more severe a man's erectile dysfunction is, the greater his risk of being hospitalized for heart problems, a new Australian study finds.

Men who already had heart problems and severe erectile dysfunction at the study's start were 64 percent more likely to be hospitalized for another heart problem during the study period compared to men without ED.

The results held even after the researchers accounted for factors that might increase the risk of heart problems, such as age, smoking, alcohol consumption and obesity.

The findings agree with previous studies that have linked erectile dysfunction to an increased risk of cardiovascular disease. [See For Men, Sex Life Gets Better with Improved Heart Health.] But the new study is one of the first to investigate whether or not the risk of heart problems increases with the severity of ED.

The findings suggest erectile dysfunction may be a marker that signals underlying heart disease, the researchers, from Australian National University, said. It has been hypothesized that atherosclerosis (plaque in the arteries that limits blood flow) might first manifest itself in smaller blood vessels, such as those in the penis, the researchers said.

When a man sees the doctor for erectile dysfunction, the visit might be an opportunity to evaluate him for other problems, said Dr. Andrew Kramer, a urologist at the University of Maryland Medical Center, who was not involved in the study.

"You can use ED to get men in the door. It might be the only thing that brings them in," Kramer said. Urologists should encourage men with moderate or severe ED to visit a primary care doctor or cardiologist for heart disease screening, he said.

The researchers examined information from more than 95,000 Australian men ages 45 and over who filled out a health questionnaire between 2006 and 2009, and linked this information to records of hospital admissions and deaths in 2010.

During the study period, there were 7,855 hospital admissions related to cardiovascular disease and 2,304 deaths, the researchers said.

Men with erectile dysfunction of any severity (mild, moderate or severe) were at increased risk for hospitalization for heart failure compared to men who did not have ED.

Those with severe ED were about twice as likely to die during the study period than men without ED, the researchers said.

The study only found an association, not a cause-effect link. The researchers also did not have information about any medications participants were taking (some medications have ED as a side effect.)

The study was published today (Jan. 29) in the journal PLOS Medicine.

Pass it on:  Men witherectile dysfunction may be at risk for hospitalization with heart problems.