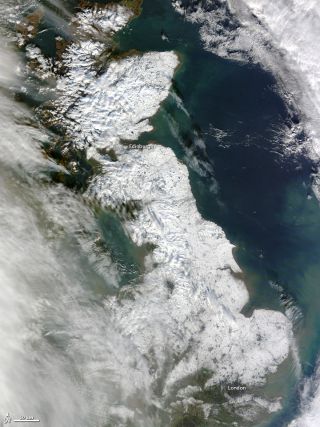 Much of the island of Great Britain is blanketed in snow in this image taken by NASA's Terra satellite on Jan. 26, 2012.
(Image: © NASA image courtesy Jeff Schmaltz, LANCE MODIS Rapid Response)

Unusually frigid and snowy conditions blanketed much of the island of Great Britain in snow earlier this month. The winter wonderland was spotted from above by NASA's Terra satellite on Jan. 26.

The snow started falling mid-month when a storm system blowing in from over the North Atlantic combined with unusually chilly conditions ushered in by a pattern called the Scandinavian Block, according to Accuweather.com. This high-pressure pattern sits in place over Scandinavia and funnels cold air toward the United Kingdom from over the Baltic and western Russia, according to the U.K. Met Office.

As of the afternoon of Jan. 21, Redesdale Camp, Scotland, was the nation's leader in snowfall, with 11 inches (29 centimeters), Accuweather reported. Earlier Accuweather reports said 8 inches (20 cm) had fallen in Sennybridge, Wales, and 6 inches (15 cm) in Dunkeswell, in the southwest of England. The snows closed many schools and forced flight cancellations and delays at London's Heathrow Airport.

Snow is a relatively uncommon sight, particularly in the southern parts of Great Britain, as the flow of the Gulf Stream funnels warm waters toward the islands, influencing the atmosphere and making conditions there milder than might be expected for the island's northerly latitudes.

The snowiest winter of the 20th century for the U.K. was that of 1947, the Met Office says, when snow fell every day somewhere in the country between Jan. 22 and March 17.

Since the snows came earlier this month, temperatures have gotten milder and precipitation has fallen in the form of rain, at least in the southern parts of the island. Skies had largely cleared when the Moderate Resolution Imaging Spectroradiometer (MODIS) on the Terra satellite snapped its picture of Great Britain, the NASA Earth Observatory noted, though a few remained over the western part of the island.

Southern parts of the island are currently threatened by flooding from heavy rains, with some higher elevations possibly seeing strong wind gusts, the Guardian reports.