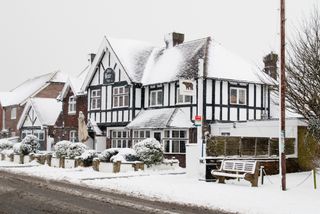 Accumulating snow and below-normal temperatures will continue to impact the United Kingdom on Monday and throughout the rest of the week.

A low pressure system that has caused a flow of cold air from Scandinavia is to blame for the lower temperatures and accumulating snow.

Many schools were closed on Monday due to the snow accumulation and icy conditions, according to the BBC News website. Some flights were canceled or delayed at the London Heathrow Airport.

Below-normal temperatures will occupy the U.K. until Friday with the average daily highs reaching 3 to 5 degrees C below normal, or 5-9 degrees F below normal, according to AccuWeather Senior Meteorologist Jim Andrews.

According to Andrews, the U.K. usually gets winds that blow west to east and allow warm air to flow off the Atlantic Ocean.

"This system has brought cold air from the north and east and shifted the normal storm track,"he said.

As of Monday afternoon, the highest snow depth was 29 cm (about 11 inches) recorded at Redesdale Camp, Scotland, and in some parts of northern Europe.

Colder air and lower temperatures are expected to stick around until Friday. On Saturday and Sunday, warmer air will provide precipitation to change over from snow to rain in most areas, according to Andrews.

The first in a series of storms clobbered most of the southern part of the U.K. last Friday with heavy snow.