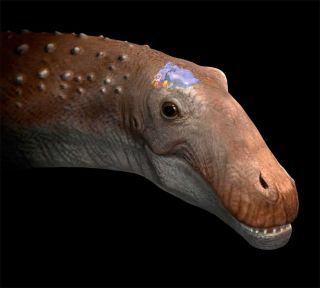 Though the plant-eating dinosaur Ampelosaurus was among the largest to walk the Earth, it was equipped with a puny brain.
(Image: © O. Sanisidro.)

An advanced member of the largest group of dinosaurs ever to walk the Earth still had a relatively puny brain, researchers say.

The scientists analyzed the skull of 70-million-year-old fossils of the giant dinosaur Ampelosaurus, discovered in 2007 in Cuenca, Spain, in the course of the construction of a high-speed rail track connecting Madrid with Valencia. The reptile was a sauropod, long-necked, long-tailed herbivores that were the largest creatures ever to stride the Earth. More specifically, Ampelosaurus was a kind of sauropod known as a titanosaur, many if not all of which had armorlike scales covering their bodies.

Sauropod skulls are typically fragile, and few have survived intact enough for scientists to learn much about their brains. By scanning the interior of the skull via CT imaging, the researchers developed a 3-D reconstruction of Ampelosaurus' brain, which was not much bigger than a tennis ball.

"This saurian may have reached 15 meters (49 feet) in length; nonetheless its brain was not in excess of 8 centimeters (3 inches)," study researcher Fabien Knoll, a paleontologist at Spain's National Museum of Natural Sciences, said in a statement. [Gallery: Stunning Illustrations of Dinosaurs]

The first sauropods appeared about 160 million years earlier than this fossil.

For years, scientists have wondered how the largest land animals ever lived with such tiny brains. "Maybe we should flip that question on their end — maybe we shouldn't ask how they could function with tiny brains, but what are many modern animals doing with such ridiculously large brains. Cows may be triple-Einsteins compared to most dinosaurs, but why?" Witmer said.

Their computer model also revealed the ampelosaur had a small inner ear.

"Part of the inner ear is associated with hearing, so the fact it had a small inner ear means it probably wasn't all that good at hearing airborne sounds," Witmer said. "It probably used a kind of hearing we don't think much about, which depends on sounds transmitted through the ground."

The inner ear is also responsible for balance and equilibrium, Witmer said.

"Given what we know about its inner ear, Ampelosaurus probably didn't put a real premium on rapid, quick jerky eye or head movements, which makes sense — these are relatively large, slow-moving, plant-eating animals," he said.

"It is quite enigmatic that sauropods show such a diverse inner ear morphology whereas they have a very homogenous body shape," Knoll said. "More investigation is definitely required."

Currently scientists are debating whether sauropods held their heads near the ground, grazing on low vegetation, or high up like giraffes to browse on high leaves. "It could be that learning more about the inner ear could tell us what sauropod neck posture was like," Witmer said.

The scientists detailed their findings online Jan. 23 in the journal PLOS ONE.