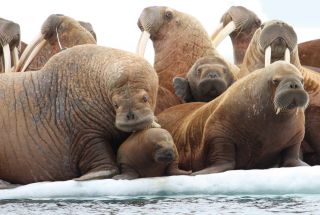 An archive of tens of thousands of animal sounds has just gone online.

The searchable Macaulay Library at the Cornell Lab of Ornithology boasts nearly 150,000 digital audio recordings, covering about 9,000 noisy species, with a total run time of 7,513 hours. Though there's an emphasis on birds, the collection contains sounds from across the animal kingdom, from elephants to elephant seals.

Some of the highlights of the collection include recordings of the curl-crested manucode, a bird-of-paradise in New Guinea, whose otherworldly calls sound like UFOs landing in a sci-fi movie. There's also a clip of a song sparrow recorded in 1929 by Cornell Lab founder Arthur Allen, which is the earliest recording in the collection.

"Our audio collection is the largest and the oldest in the world. Now, it's also the most accessible," library director Mike Webster said in a statement. "We're working to improve search functions and create tools people can use to collect recordings and upload them directly to the archive. Our goal is to make the Macaulay Library as useful as possible for the broadest audience possible."

"Now that we've digitized the previously archived analog recordings, the archival team is focusing on new material from amateur and professional recordists from around the world to really, truly build the collection," audio curator Greg Budney said. "Plus, it's just plain fun to listen to these sounds. Have you heard the sound of a walrus underwater? It's an amazing sound."

You can check out the sounds of walruses and other animals here: www.MacaulayLibrary.org.