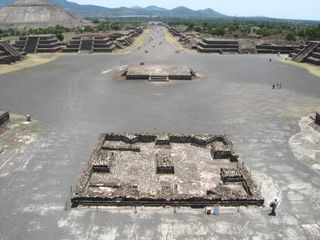 The Avenue of the Dead in the ancient city of Teotihuacan gives a sense of this Mesoamerican cultural center's enormous monuments.
(Image: © Hector García)

Death didn't mean the end of beauty for pre-Hispanic civilizations in what is now Mexico. A new study finds that ancient Teotihuacans likely exhumed the dead and painted them with cosmetics during periodic remembrance rituals.

The ancient city of Teotihuacan is northeast of modern-day Mexico city. It was a major cultural area in its day, marked by huge monuments, temples and pyramids. Among the archaeological finds at the site are pots of cosmetic pigments. It was these pots that researchers from Mexico and Spain analyzed to reveal the death practices.

"The conclusion that we have reached, given the structure of the pigments found, is that they are remains of cosmetics that were used in rituals following burial," study leader María Teresa Domenech Carbo, director of the University Institute of Heritage Restoration of the Polytechnic University of Valencia, said in a statement.

The pots date to between A.D. 200 and A.D. 500, when it was common for deceased nobility to be remembered in post-burial ceremonies, Domenech said. The dead were buried underneath the floors of their homes. After burial, the high priest of the city would come to pay homage to the dead.

"Cosmetics were used by the priest carrying out the ceremony and formed a part of the ritual," Domenech said. "The remains of carbonaceous particles found lead to the belief that aromatic materials were burnt, with the priest painting parts of the body with those pigments." [10 Weird Ways We Deal With the Dead]

In addition, she said, the body was likely removed from its grave and "redecorated." The makeup is found only in the graves of nobles, the researchers said. Commoners would not have received the ritual cosmetic treatment.

The cosmetics lacked any sort of sticky or "agglutinative" substance that would help it cling to living flesh, the researchers report in the Journal of Archaeological Science. That composition suggests the makeup had a ritual purpose in burial ceremonies rather than something that was used in daily life and put in graves as a good the deceased might need in the afterlife, as was done in ancient Egypt

The makeup also provides hints into the economy of Toetihuacan. Some of the ingredients, such as pulverized volcanic rock and claylike substances, come from nearby the city. Others required long-distance trade. For example, shiny mica and the mineral jarosite aren't native to the Teotihuacan region, meaning they must have been imported from elsewhere in Mexico.

"No surprise, since this city dominated the entire Mesoamerican region," Domenech said.