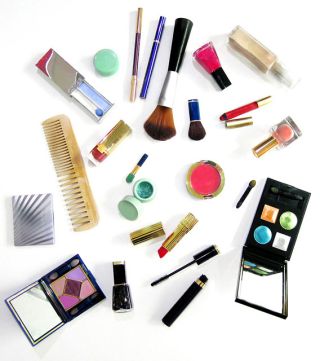 Photo taken by Valentina Jori. (tijmen) There are no usage restrictions for this photo

More than $40 billion is blown on cosmetics globally each year and hundreds of hours are spent applying creams, lotions and powders. Even with the recent downturn in the economy, makeup-addicts have simply turned to drugstores, instead of high-end boutiques, to snag their tonics, wands and face paints, according to a recent consumer report by Euromonitor International.

Some people treasure their makeup and can't imagine life without it. Others would argue all this time and money is wasted. But what does science say?

Biologists argue that cosmetics can play a significant role in how your life turns out.

While it is often said that love is blind, "physical attractiveness seems to be one of the most prominent factors, if not the most significant one, in human mate selection," said behavioral biologist Bernhard Fink of the University of Gottingen in Germany. And cosmetics enhance attractiveness in a quantifiable and real-world relevant way, Fink told LiveScience.

Cosmetics have also been shown to boost earning potential and perhaps even make a promotion more likely, according to a study in the Journal of Applied Social Psychology in 2006.

But before letting the woman behind the makeup counter pack up a duffel bag of "life-altering" products, you might wish to know which ones are worth the dollars and time.

If you are trying to look healthier, foundation and face powders may be most important. If masking your age is your priority, mascara and a little nose shading may be a better bet than wrinkle creams. And if luring in a lover is your goal, you may want to amplify sex-specific traits, such as lush lips or sultry eyes.

A uniform skin tone can be a sign of health, Fink said, and attempts to hide sacks of fatigue under your eyes or a distracting blemish could also win points in the health category. This likely explains the popularity of foundations, concealers and skin-care products among both men and women.

At over $13 billion dollars, foundation and similar makeup products formed the lion's share of the global color cosmetics market in 2008.

And the popularity of men's skin-care products is expected to continue growing in the United States no matter the economy, reported Euromonitor International in 2009.

Wrinkles and fine lines might not be worth losing beauty sleep over. The geometry of your face will likely give away your age long before anyone notices crow's feet, researchers are finding.

One feature that skews face geometry lies right on center stage: the nose.

While most facial features finish growing shortly after adolescence, the nose (and ears) never gets the memo. A large schnoz in relation to the rest of the face is often a sign of an older person. Of course, ethnicity can also determine relative nose size.

But if you're not interested in growing old gracefully, using a contour brush to shrink your beak will likely have a bigger impact on your appearance than a hundred-dollar wrinkle cream.

Studies have shown that not only do the eyes see, they demand to be seen – a trait possibly unique to humans.

So you may be able to drown out the nose's announcement of your age, by amplifying the eyes. Large eyes, in particular, have long been associated with faces that look young, even "babyish."

Mascara is one popular way of making eyes seem voluminous.

Relative darkness of the skin area around the eyes also matters. Male faces tend to have relatively uniform shading, while the eye regions of women, even without makeup, tend to be significantly darker than the rest of the face, according to studies by Richard Russell at Gettysburg College in Pennsylvania.

"Increasing or decreasing this luminance difference will make a face more feminine or masculine, respectively, and hence, more or less attractive," explained Fink who was not involved in Russell's studies.

By augmenting this contrast, mascara, eyeliner and eye-shadow showcase femininity. So even if ancient Egyptian men did line their eyes with kohl (black-shaded cosmetic), eye makeup is not recommended for today's metrosexual man.

Russell found similar gender differences between the contrast of the lips and the rest of the face, with women naturally having darker mouths than men of the same skin tone. Lipstick enhances this difference, silently calling out, female here!

Despite the occasional popularity of Goth lipstick, classic crimson shades are – surprise, surprise – more objectively attractive. Red lips can signal healthy circulation and even sexual arousal – a message that grabs most men's attention.

The shape of your kisser, something often redefined by lip-liners and their ilk, can also affect attractiveness. Lip symmetry is an important trait for both men and women, according to researcher Kendra Schmid and colleagues at the University of Nebraska.

Full lips, however, are more a woman's prerogative. Lush lips tend to develop under the influence of female hormones and could indicate fertility, explained Fink in a 2005 issue of the International Journal of Cosmetic Science. Balms and other lip products aim to create this look.

If you are now ready to throw out your makeup bag and just stick to your lip gloss, consider this: At least one study, published in the International Journal of Cosmetic Science in 2003, found that lipstick alone does nothing to increase attractiveness.