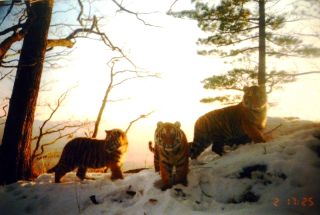 Camera trap images reveal tiger numbers rebounding across Asia, especially in southwestern India, where young tigers are leaving protected reserves due to population pressure, according to the Wildlife Conservation Society.

The WCS attributes the rise in different tiger groups to better law enforcement and protection of additional habitat. For example, a notorious poaching ring was busted in Thailand last year, and the gang leaders have been given prison sentences of up to five years — the most severe punishments for wildlife poaching in Thailand's history, the conservation group said in a statement.

Tiger numbers have been rising steadily in Thailand's Huai Kha Khaeng Wildlife Sanctuary since 2007, with a record 50-plus tigers counted last year, the WCS said. The sanctuary is part of the country's Western Forest Complex. This core spans 7,000 square miles (18,000 square kilometers) and is home to an estimated 125 to 175 tigers.

In India's mountainous landscape of Nagarahole and Bandipur national parks, tigers have reached saturation levels, with more than 600 individuals caught on camera trap photos in the past decade. Young tigers are leaving the parks along protected corridors and entering a landscape with a population of a million people, the group said. [In Images: Tigers Rebound in Asia]

Conservationists also worked with government officials in Russia to create additional protected areas for tigers. The country declared a new corridor, called the Central Ussuri Wildlife Refuge, on Oct. 18. The refuge links the Sikhote-Alin tiger population in Russia — the main group of endangered Amur tigers— with tiger habitat in China's Heilongjiang Province in the Wandashan Mountains. The refuge ensures that tigers can move across the border between Russia and China in this region.

An estimated 3,200 tigers are living in the wild, with only 2,500 breeding adult pairs, according to TRAFFIC, a monitoring group funded by the World Wildlife Fund and the International Union for the Conservation of Nature. Tigers have lost 93 percent of their historical range, which once sprawled across Asia from Turkey to Russia and south to Bali, according to the group.

"Tigers are clearly fighting for their very existence, but it's important to know that there is hope. Victories like these give us the resolve to continue to battle for these magnificent big cats," Cristián Samper, WCS president, said in a statement.