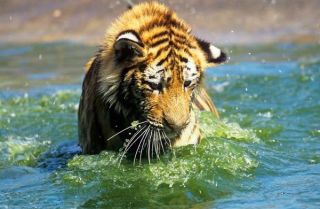 A young Siberian tiger. In August, a drugged, two-month-old tiger cub even smaller than this one was discovered stuffed into a woman's suitcase at the Bangkok airport, as she tried to board a plane bound for Iran. That tiger-smuggling attempt was foiled, but a new report shows that many succeed.
(Image: © David Lawson/WWF-Canon.)

They're found alive and dead, whole and in pieces, sometimes sawed completely in half, pieces of spine and torn muscle poking through bright fur. But typically, all that is recovered of the massive beasts are skin and piles of dried up bones, claws, teeth even tiger penises.

WWF, the international conservation group, estimates that fewer than 3,200 tigers still roam freely on the planet. Three of the nine tiger subspecies are already extinct.

The new report from TRAFFIC, a global wildlife trade monitoring group, tallied seizures of tiger goods between 2000 and 2010 in Bangladesh, China, India, Indonesia, Laos, Malaysia, Myanmar, Nepal, Russia, Thailand and Vietnam. (No verifiable data were available for Bhutan and Cambodia, and neither were included in the study.)

The report estimates that parts from between 1,069 and 1,220 tigers were uncovered in the documented seizures, although it's certainly likely that even more animals were sold and never recovered, said Sabri Zain, the advocacy director for TRAFFIC International.

Although India, China and Nepal lead the pack in sheer number of busts, the report found an increase in seizures of tiger parts over the last few years in Indonesia, Nepal, Thailand and Vietnam.

Whether that increase is due to stepped-up enforcement efforts or due to a rise in illegal trade is unclear, Zain told OurAmazingPlanet. "Either way, it does indicate that there is still a steady supply and demand for these products," Zain said, which is a big concern.

The TRAFFIC report did reveal a range of tastes in tiger products among the countries examined, which could allow governments to appropriately tailor awareness campaigns, Zain said.

In Vietnam, it appears there's greater demand for tiger meat, whereas in Indonesia, tiger claws and bits of tiger skin are popular in their use as magical amulets to ward off evil.

"If it's well-known there's a healthy demand for the meat, there's no point in starting a campaign about tiger bone medicine," Zain said, and pointed out that awareness campaigns have been successful in the past, particularly in Tibet, where the use of tiger skins for ceremonial robes has plummeted thanks to education efforts.

The illegal tiger trade is not limited to the countries where the animals live . Between 2005 and 2009, the U.S. Fish and Wildlife Service (FWS) worked on more than 300 cases involving violations of the ban on tiger parts, said Sandra Cleva, a department spokesperson.

"The trade is there, but I would not describe it as large-scale," Cleva told OurAmazingPlanet.

Many of the violations have related to traditional medicines that purport to contain tiger parts. Whether a product actually contains the endangered animal or not is largely irrelevant, Cleva said, pointing to a 1998 law that bans the labels.

"Even a product labeled as such clearly contributes to trafficking in the animals," Cleva said.

The release of TRAFFIC's report comes two weeks ahead of an international tiger conservation summit in Russia, aimed at coordinating global efforts to save the big cats before they disappear.

"We've just created the baseline," Zain said, adding that countries around the world can do their part by exchanging intelligence on tiger trafficking.