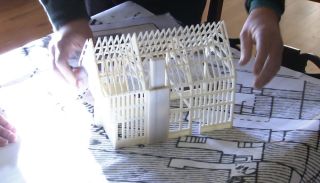 A 3D printed model of the Blue Boar Inn where King Richard III stayed shortly before his death in England's War of the Roses.
(Image: © University of Leicester)

A medieval inn where England's King Richard III spent the night before going off to die in battle has undergone minor resurrection through 3D printing technology.

The Blue Boar Inn played host to Richard shortly before he died at the Battle of Bosworth Field — an event commemorated by Shakespeare in his fictional account of the doomed king crying out: "My kingdom for a horse!" A 3D printer created a small model of the inn based on computer modeling and detailed drawings found in the notebooks of a 19th-century architect.

"When I was looking through this notebook, what was thrilling about it was that the drawings were so detailed," said Richard Buckley, director of archaeological services at the University of Leicester in the U.K., in a news release. "They showed how the building was put together — the timber framing, the joints, pegholes — all annotated with measurements in feet and inches."

The building's plans discovered in the notebooks of 19th-century architect Henry Goddard became the basis for a computer-aided design (CAD) model created by Steffan Davies, a modern architect familiar with historic building drawings. That allowed a 3D printer in the University of Leicester's department of physics and astronomy to build a real model of the inn layer by layer. [10 Incredible 3-D Printed Products]

The 3D-printed model shows the timber framing of the inn, the fireplaces and the chamber where Richard III supposedly stayed. Researchers plan to not only exhibit the model for the public, but also perhaps build a full-scale reconstruction of the inn someday.

"Legend has it that Richard did not like sleeping in strange beds, so had his own brought down from Nottingham in 'knock-down' form so it could be put together at the inn," Buckley said.

The inn on Leicester's High Street may have hosted Richard III under its original name of the White Boar Inn. Some historical sources suggest the building changed its name after the Battle of Bosworth Field to avoid any possible connections with Richard III's badge.

Richard III went on to perish fighting at the Battle of Bosworth Field — the last pivotal battle of England's War of the Roses between the House of Lancaster and the House of York. The bloody historical conflict later inspired the popular fantasy book series "A Song of Fire and Ice" and its HBO TV show counterpart "Game of Thrones."

The University of Leicester team may have also found Richard III's remains beneath a parking lot. But more definitive proof will only come from DNA test results regarding the male human skeleton discovered with a signs of battle wounds at a site that seems to match historical accounts of Richard's burial.