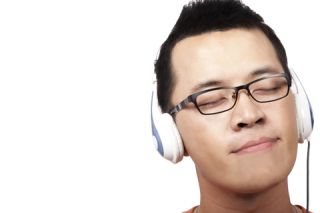 People use the same types of features to capture emotion in both movement and music across cultures, a new study finds
(Image: © Russ Toro, LiveScience Contributor)

Universal emotions like anger, sadness and happiness are expressed nearly the same in both music and movement across cultures, according to new research.

The researchers found that when Dartmouth undergraduates and members of a remote Cambodian hill tribe were asked to use sliding bars to adjust traits such as the speed, pitch, or regularity of music, they used the same types of characteristics to express primal emotions. What's more, the same types of patterns were used to express the same emotions in animations of movement in both cultures.

"The kinds of dynamics you find in movement, you find also in music and they're used in the same way to provide the same kind of meaning," said study co-author Thalia Wheatley, a neuroscientist at Dartmouth University.

The findings suggest music's intense power may lie in the fact it is processed by ancient brain circuitry used to read emotion in our movement.

"The study suggests why music is so fundamental and engaging for us," said Jonathan Schooler, a professor of brain and psychological sciences at the University of California at Santa Barbara, who was not involved in the study. "It takes advantage of some very, very basic and, in some sense, primitive systems that understand how motion relates to emotion."

Why people love music has been an enduring mystery. Scientists have found that animals like different music than humans and that brain regions stimulated by food, sex and love also light up when we listen to music. Musicians even read emotions better than nonmusicians.

Past studies showed that the same brain areas were activated when people read emotion in both music and movement. That made Wheatley wonder how the two were connected.

To find out, Wheatley and her colleagues asked 50 Dartmouth undergraduates to manipulate five slider bars to change characteristics of an animated bouncy ball to make it look happy, sad, angry, peaceful or scared.

To create different emotions in "Mr. Ball," the students could use the slider bars to affect how often the ball bounced, how often it made big bounces, whether it went up or down more often and how smoothly it moved.

Another 50 students could use similar slider bars to adjust the pitch trajectory, tempo, consonance (repetition), musical jumps and jitteriness of music to capture those same emotions.

The students tended to put the slider bars in roughly the same positions whether they were creating angry music or angry moving balls.

To see if these trends held across cultures, Wheatley's team traveled to the remote highlands of Cambodia and asked about 85 members of the Kreung tribe to perform the same task. Kreung music sounds radically different from Western music, with gongs and an instrument called a mem that sounds a bit like an insect buzzing, Wheatley said. None of the tribes' people had any exposure to Western music or media, she added.

Interestingly, the Kreung tended to put the slider bars in roughly the same positions as Americans did to capture different emotions, and the position of the sliders was very similar for both music and emotions.

The findings suggest that music taps into the brain networks and regions that we use to understand emotion in people's movements. That may explain why music has such power to move us — it's activating deep-seated brain regions that are used to process emotion, Wheatley said.

"Emotion is the same thing no matter whether it's coming in through our eyes or ears," she said.

The study is detailed today (Dec. 17) in the journal Proceedings of the National Academy of Sciences.