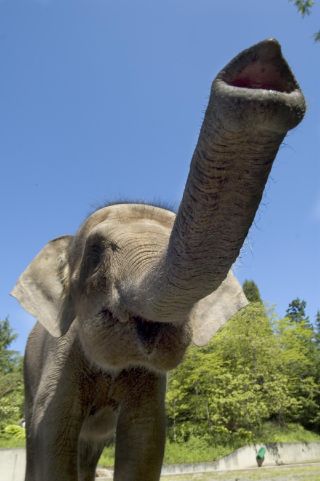 This recent study examined DNA from 10 elephants, nine of them from Sabah, and one from the Oregon Zoo. The Oregonian elephant, Chendra, is shown above. According to the zoo’s bio for her, wildlife officials found Chendra orphaned, alone and hunger near a palm-oil plantation on Borneo. She had wounds on her front legs and left eye, which ultimately left her blind in that eye. Chendra was a poor candidate for release back into the wild, the bio said.
(Image: © Oregon Zoo)

To help protect a diminutive elephant researchers are taking an innovative look at the pachyderm's genome.

The goal is to understand the genetic diversity of pygmy elephants on the island of Borneo. Numbering about 2,000, these babyish-looking elephants are the most endangered subspecies of Asian elephant. They live primarily in the Malaysian state of Sabah on Borneo, where they are threatened by the loss and fragmentation of their forest, often by development associated with palm oil, widely used, edible plant oil.

"We are interested in looking at the diversity of elephants around the whole distribution range in Sabah," said study researcher Reeta Sharma, a postdoctoral fellow at the Instituto Gulbenkian de Ciência (IGC) in Portugal.

Sharma and colleagues want to see how genetic diversity is distributed within the Borneo elephant population and how the fragmentation — or breaking up — of their forest habitat is affecting it by, for example, isolating groups of elephants. Increased isolation can be problematic because it means inbreeding, which can lead to more sickly and vulnerable animals. Their results suggest low genetic diversity in the pygmy elephants. [Amazing Photos of Pygmy Elephants]

Not easy to find

From the outset, the researchers knew they would need a close look to find markers within the elephant's genetic code that they could use to assess diversity. Markers are spots in the sequence that should vary between individual animals.

Only one previous study, published in 2003, conducted a genetic analysis of Borneo elephants. Using information developed from other Asian elephants, this study found low levels of diversity among Borneo elephants, meaning researchers were on the hunt for needles in a haystack.

"There is diversity there but you need genomes to look at it," said study researcher Lounès Chikhi, a researcher at the Centre National de la Recherche Scientifiquein France and a principal investigator at the IGC.

A genome is an organism's DNA (deoxyribonucleic acid) sequence. Sharma and Chikhi hoped to harness rapidly evolving technology for reading large amounts of this sequence to identify markers they could use to assess diversity.

Before the arrival of genome-sequencing technology, identifying markers was a cumbersome and tedious process. Often, researchers had to rely on markers developed for relatives of the animal in question, the researchers said.

The Borneo elephant presented a particular challenge, because until this current study no sequencing work had been done on it.

Sharma and Chikhi tried two genomic techniques to find genetic markers that differed from elephant to elephant. The first technique is known as shotgun sequencing; it breaks the genome into small pieces before sequencing them. Researchers at the University of Connecticut, led by Rachel O'Neill, performed this sequencing and identified the markers.

The second technique, known as RAD-seq, examined small subsets of the genome defined by sites at which an enzyme had cut the DNA sequence. A biotech company in Oregon, Floragenex, performed this work on blood samples from eight elephants.

Blood from Borneo elephants is hard to come by, but company vice president, Jason Boone, located one of the study elephants, a female named Chendra, at the Oregon Zoo, and arranged to have a sample taken from her. The other samples were collected from elephants in Sabah.

Each technique generated a unique set of thousands of markers.

"What we show is the two methods are good, but they have differences," Chikhi said.

He and Sharma are currently applying both sets of markers to DNA found in elephant fecal samples in Sabah.

The genomic approach may make it possible to relatively quickly identify markers and assess them in samples from other rare and endangered species in which little to no prior genomic work has been done, according to Chikhi and Sharma, whose research was published in November in the journal PLoS ONE.

Others are beginning to apply genomics to endangered species.

For instance, in June 2011, researchers reported sequencing the whole genomes of two Tasmanian devils in the hopes of providing information that might help conservationists protect the animals from a devastating facial cancer.