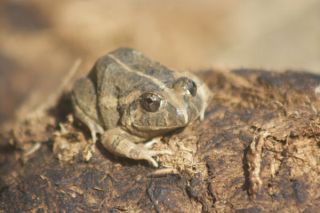 One of the species of frog (Sphaerotheca sp.) found in a pile of Asian elephant dung.
(Image: © Ahimsa Campos-Arceiz)

They may not be the best-smelling homes, but Asian elephant dung piles provide certain frog species with shelter, one researcher has found.

Ahimsa Campos-Arceiz, of the University of Tokyo when the research was conducted, found the dung-dwelling frogs in the area around Sri Lanka's Bundala National Park, while searching for signs that Asian elephants acted as ecosystem engineers in their environments.

Big animals, such as elephants, are particularly good at ecosystem engineering, because they can have such a proportionately large impact on their environment, Campos-Arceiz said.

Previous studies have shown that African savanna elephants (Loxodonta Africana) impacted their ecosystem by creating refuges for tree-dwelling lizards — when the elephants broke off twigs and branches while feeding, they left behind crevices in the trees. The research showed that lizard communities were more diverse in places where elephants also lived.

Campos-Arceiz. now of the National University of Singapore, wondered if Asian elephants (Elephas maximus) might have a similar impact on their ecosystems.

During August 2008, Campos-Arceiz was in Bundala National Park inspecting Asian elephant dung piles looking for seeds (the feces can act as a nutrient source for plants and fungi, which will germinate and grow there). Instead, he found an amphibious surprise: six frogs representing three different species (Microhyla ornata, Microhyla rubra and Spaerotheca sp.) in five dung piles.

"I was looking for seeds in the dung. And was ready for some insects and other invertebrates. But I never thought about a vertebrate like a frog staying inside of the dung," Campos-Arceiz told LiveScience.

Accompanying the frogs in the dung piles were beetles, termites, ants, spiders, scorpions, centipedes and crickets, "suggesting that a dung pile can become a small ecosystem of its own," Campos-Arceiz wrote in the study, entitled "Shit Happens (to be Useful)! Use of Elephant Dung as Habitat by Amphibians," detailed in the journal Biotropica.

"I don't really remember how it came up, but it happened as soon as I decided to write a paper. I created a folder in my computer called 'Shit Happens!' and this project name made the work funnier for me," Campos-Arceiz said.

The frogs Campos-Arceiz found live among the leaf litter on the ground. But that litter can be scarce in the dry season (when Campos-Arceiz was visiting), so he suspects the dung may provide an alternative habitat for the frogs.

Campos-Arceiz suspects that Asian elephants may act as ecosystem engineers in their environment in other ways as well.