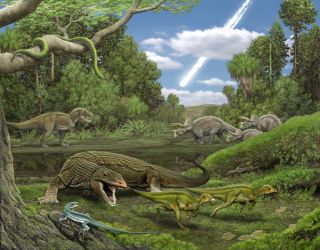 New research suggests that reptiles that lived during the Dinosaur age were hard-hit. Here, the carnivorous lizard Palaeosaniwa chases a pair of young Edmontosaurus while the snake Cerberophis and the lizard Obamadon look on.
(Image: © Carl Buell)

The massive extinction that killed off the dinosaurs may have also decimated lizards and snakes, according to new research.

In the past, researchers believed that the K-T extinction, which occurred around 65 million years ago, wiped out dinosaurs, but mostly spared lizards and snakes. But the new findings, published today (Dec. 10) in the Proceedings of the National Academy of Sciences, showed that about 83 percent of these reptiles went extinct.

"I think it is a pretty important piece of work," said Stephen Brusatte, a paleontologist from Columbia University who was not involved in the study. "It does a nice job of showing that extinction at the end of the Cretaceous really hit lizards and snakes hard."

The findings actually make the story of the end Cretaceous Era mass die-off more consistent, because it's hard to imagine a catastrophe capable of destroying the dinosaurs would spare lizards and snakes, said study co-author Nicholas Longrich, a paleontologist at Yale University. [Wipe Out: History's Most Mysterious Extinctions]

"You can't wipe out the dominant carnivores and dominant herbivores on the planet without causing devastation of the ecosystem on a massive scale," Longrich told LiveScience.

Most researchers think a giant meteor crashing to Earth at the Yucatan peninsula caused the mass extinction that killed the dinosaurs. The impact likely released a sun-blocking cloud of dust into the atmosphere, preventing plants from making food and causing dinosaurs to die as a result.

To see if lizards and snakes were somehow shielded from the doom, Longrich and his colleagues collected fossil records from the reptiles across North America. Before the extinction, snakes and lizards were flourishing, with 27 lizard species and three snake species documented in the fossil record. In the years immediately afterward, only five species remained, with most disappearing from the fossil record quite abruptly, Longrich said.

If most plants died, then plant eaters and their predators would have died off too, he added. It's likely that only scavengers and animals that preyed on them came out of the Cretaceous period relatively unscathed.

"When everything starts dropping dead, and everything dies, there's probably bugs and grubs and worms eating them and that's probably what the survivors were eating," Longrich said.

The findings are consistent with an asteroid slamming into Earth and leading to the dino demise, Longrich said. (Just last week at the meeting of the American Geophysical Union, researchers presented an argument for volcanoes, not a space rock, doing in the dinosaurs.)

The new fossil analysis convincingly shows that reptiles faced a severe extinction in North America, wrote Richard Cowen, a geoscientist at the University of California, Davis, who was not involved in the study, in an email. Because the meteorite hit Chicxulub in Mexico, you would expect the greatest death toll within North America, but the researchers' case for a worldwide die-off from the space rock is much shakier, he said.

"In order to justify a global discussion of the K-T, the authors try to persuade us that the same effect that they document for North America happened worldwide, but they only mention a few data points from Asia," Cowen wrote.

Unfortunately, that may be the best evidence scientists have, because there aren't many fossils from before, during and after the extinction anywhere but North America, Brusatte told LiveScience.