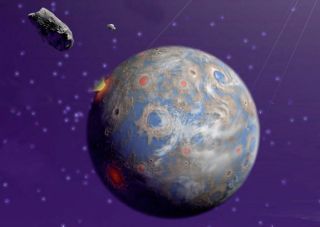 A meteor strike 65 million years ago likely wiped out the dinosaurs, with a new study suggesting the demise was a quick one.
(Image: © NASA/JPL)

A dinosaur horn is now pointing to a catastrophic end for the Age of Dinosaurs, not a gradual one as some researchers have claimed.

The leading culprit for the end of the Age of Dinosaurs is a catastrophic meteor strike about 65 million years ago. Although it is now widely accepted that a cosmic impact took place about then — a time known as the Cretaceous-Tertiary, or K-T boundary — it was unclear if the mass extinctions started gradually before the hit, perhaps due to volcanoes or other factors.

Helping drive this controversy was a zone spanning 10 feet (3 meters) wide in the earth right below the K-T boundary that purportedly lacked dinosaur fossils. A number of scientists have claimed this gap, seen in the western interior of North America, was evidence that dinosaurs might have died off well before any impact. Other researchers have contested the notion, suggesting this layer only appeared devoid of fossils because fossils can get easily destroyed over millions of years. Also, the placement of the K-T boundary can be uncertain, meaning that dinosaurs might have actually been found in this zone before but not reported as such. [Image Gallery: Dinosaur Fossils]

Now scientists have discovered a fossil in this supposedly barren zone — a dinosaur horn no more than 5 inches (13 centimeters) below the impact layer, making it the specimen closest to the end of the Age of Dinosaurs found yet. The horn, nearly 18 inches (45 cm) long, most likely belonged to a Triceratops, the most common dinosaur in the layer of rock in which it was found last year, called the Hell Creek Formation of southeastern Montana.

Just because "we have one dinosaur in the gap doesn't necessarily falsify the idea that dinosaurs were gradually declining in numbers," researcher Tyler Lyson, a vertebrate paleontologist at Yale University, told LiveScience. "However, this find indicates that at least some dinosaurs were doing fine right up to the K-T boundary."

The scientists detail their findings tomorrow (July 13) in the journal Biology Letters.