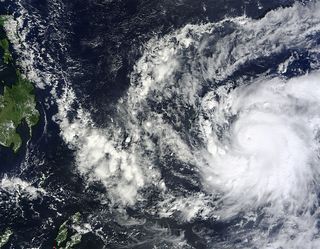 A massive typhoon, equivalent to a Category 5 hurricane, has formed in the western Pacific and is headed toward the Philippine island of Mindanao, which doesn't usually get hit by these types of storms and isn't well-prepared, according to reports.

Bopha is likely to be the strongest typhoon ever recorded in Mindanao, according to Jeff Masters at the weather blog Wunderground.

After steadily intensifying today (Dec. 3), Super Typhoon Bopha now has winds up to 160 mph (260 kph) and will make landfall early Tuesday, local time, according to the Joint Typhoon Warning Center (JTWC), run by the U.S. Navy and Air Force. The island has already started to feel the wrath of Bopha, encountering the first of its winds and rains; it could drop as much as 12 inches (30 centimeters) of rain in some areas, according to the BBC.

The island of Mindanao rarely gets hit by typhoons, Masters noted, since the island is too close to the equator; these storms are typically found to the north. Masters said the infrastructure of Mindanao is not prepared to handle heavy typhoon rains and Bopha looks to be a potentially a catastrophic storm.

The typhoon follows a similar track to last year's Tropical Storm Washi, which hit Mindanao on Dec. 16, 2011, with 60-mph (97 kph) winds and torrential rains. Washi triggered widespread flooding that killed more than 1,200 people. Washi was only a tropical storm, with winds less than half the speed of Bopha's gusts.