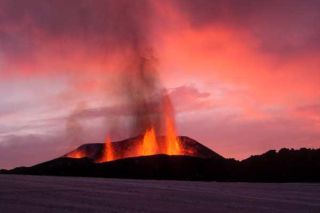 The eruptions of Iceland's volcano Eyjafjallajökull in 2010 were apparently triggered by a chain reaction of expanding magma chambers that descended into the Earth, a group of researchers now says.

After nearly two centuries of dormancy, Eyjafjallajökull (AYA-feeyapla-yurkul) erupted many times over the course of 10 weeks. These outbursts spewed a huge plume of ash that generated extraordinary lightning displays, colored sunsets a fiery redacross much of Europe and forced widespread flight cancellations for days.

The eruptions began in 2010 when a fissure opened on the flank of Eyjafjallajökull in March, revealing that it was inflating with magma. An explosion then burst from the volcano's summit in April, and three more major explosions from Eyjafjallajökull rocked Iceland in May. Analysis of material spewed from the explosions suggests each one involved separate chambers loaded with magma of distinct ages and compositions.

To learn more about what caused this spate of eruptions, the researchers analyzed swarms of microearthquakes during the outbursts. The data suggests the first explosion was rooted in a magma chamber about 3 miles (5 kilometers) below the surface, while the three later major explosions stemmed from magma chambers at depths of about 7 miles (11.5 km), 12 miles (19 km) and 15 miles (24 km). [Image Gallery: Iceland Volcano's Fiery Sunsets]

"Our Icelandic colleagues were quick to add more seismometers to the network close to the volcano when it became obvious from satellite imaging that the volcano was inflating, so the data were much better because of that," said researcher Jon Tarasewicz, a geophysicist at the University of Cambridge in England.

Intriguingly, the researchers found that microearthquakes apparently occurred at greater depths with each outburst. Now researchers suggest this series of eruptions was due to a "decompression wave" that essentially rippled downward, upsetting the volcano's plumbing.

The initial explosion spewed a massive amount of magma and melted about 650 feet (200 meters) of ice. The researchers suggest this relieved a great deal of pressure exerted from Eyjafjallajökull's summit on its innards. This drop in pressure from above caused a magma chamber slightly lower down to begin inflating. When this led to an explosion, this liberated magma in another chamber slightly lower down, and created a cascade through successively lower chambers.

"We often think about eruptions as being controlled entirely from below by the supply of fresh magma from below — that is, the pressure caused by new magma rising buoyantly is what determines whether it erupts or not," Tarasewicz told OurAmazingPlanet. "We don't often consider how that driving force might be affected by changes from above."

"It's novel to have been able to match the deep seismic observations to big changes in the eruption rate at the surface," Tarasewicz continued. "In this case, it seems the volcanic plumbing system at depth responded to changes near the surface, rather than vice versa."

Better understanding, but no predictions

Tarasewicz and his colleagues are now analyzing data from other Icelandic volcanoes such as Krafla and Askja to better understand their plumbing systems as well.

"There are several examples around the world of volcanoes that are thought to have more than one magma chamber, stacked at different depths beneath the volcano," Tarasewicz said. "Understanding the pressure linkage and feedback between different magma storage reservoirs may help us to understand why some volcanoes like Eyjafjallajökull have prolonged eruptions with episodic surges in eruption rate."

Although this research could yield insights on the magma underlying a volcano and how it might behave, Tarasewicz cautioned, "we are still not in a position to be able to predict accurately in advance when, or if, a volcano is going to erupt."

The scientists detailed their findings online Oct. 13 in the journal Geophysical Research Letters.