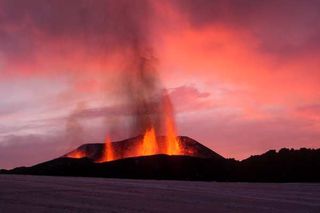 A peek into the roots of the eruption of the Eyjafjallajökull volcano in Iceland earlier this year that disrupted flights across Europe could shed light on the mysterious behavior of volcanoes that have been dormant for centuries.

The volcano Eyjafjallajökull (AYA-feeyapla-yurkul) burst to life in March after nearly two centuries of dormancy. It then erupted in April, spewing a huge plume of ash that created phenomenal lightning displays, colored sunsets a fiery red across much of Europe, and forced flight cancellations for days.

As explosive as Eyjafjallajökull proved, it is actually only a moderately active volcano — that is, one that erupts once every few centuries or even millennia, explained volcanologist Freysteinn Sigmundsson at the University of Iceland.

Eyjafjallajökull actually lies away from the rift in the earth that other Icelandic volcanoes spring from and which is ultimately responsible for the island's existence. Until now, it was uncertain as to whether, or how "colder," moderately active volcanoes such as Eyjafjallajökull behaved any differently from their hotter and more active kin during eruptions, since they erupt less often for researchers to study.

Sigmundsson and an international team of collaborators had tracked Eyjafjallajökull over the last two decades of intermittent volcanic unrest using satellite radar, GPS receivers and seismic monitoring. This enabled them to deduce how the volcano swelled to within a few millimeters accuracy due to the flow of magma within in the months before and after it became active.

When it comes to a typical eruption of highly active volcanoes, scientists have learned over the years that magma chambers within the volcano gradually fill up beforehand and rapidly deflate as pressure is released, deforming the surface. However, the magma chamber that deflated in Eyjafjallajökull during the explosive April eruption was not the one that filled up right beforehand.

"One of the surprises was the complexity of the plumbing system," Sigmundsson said. "There was not one main magma chamber active under the volcano capturing magma in 18 years of unrest preceding the eruption, as is often envisioned in models for the most active volcanoes on Earth. Rather, two or more discrete magmatic sources were involved, with magma of different composition."

The cause of Eyjafjallajökull's explosive eruption seemed to be the meeting of one body of magma, made up mostly of the common volcanic rock basalt, with another type of magma within the volcano, consisting largely of silica-rich trachyandesite.

The behavior of Eyjafjallajökull might be typical for such moderately active volcanoes.

"The study gives the hope that with similar methods as we have used, we can better understand how volcanoes work and how they wake up before eruptions," Sigmundsson said. "Our research shows that mapping out magmatic plumbing systems is important to correctly interpreting potential precursors to eruption. The situation of a slowly growing magmatic intrusion inside a volcano can quickly go out of bounds if such an intrusion hits a body of magma of different composition — then a sudden explosive eruption can occur, as in Iceland earlier this year."

Sigmundsson and his colleagues detailed their findings Nov. 17 in the journal Nature.