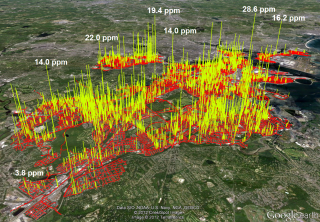 Beneath the streets of Boston is an aging network of natural gas pipelines that delivers fuel to heat homes and power appliances but also threatens to feed fires and even cause explosions. Highlighting the need for repairs, a new study detected more than 3,300 natural gas leaks throughout the city.

Researchers from Boston University and Duke logged 785 road miles (1,263 kilometers) in the city, driving around in a GPS-equipped car with a device to measure methane, the chief chemical component of natural gas. The team discovered 3,356 separate natural gas leaks — some of them potentially hazardous.

"While our study was not intended to assess explosion risks, we came across six locations in Boston where gas concentrations exceeded the threshold above which explosions can occur," Nathan Phillips, associate professor at BU, said in a statement.

The leaks were associated with old cast-iron underground pipes and were distributed evenly across all neighborhoods, regardless of socioeconomic differences, the researchers said. Their findings were detailed online this week in the journal Environmental Pollution.

Concerns about aging natural gas pipelines aren't unique to Boston. Each year, pipeline failures cause an average of 17 deaths, 68 injuries, and $133 million in property damage across the nation, according to the U.S. Pipeline and Hazardous Materials Safety Administration. Some of the devastating fires that erupted in the New York area during Hurricane Sandy were fueled by natural gas and recent deadly accidents — like the 2010 explosion in San Bruno, Calif., which killed eight — have drawn attention to the importance of pipeline safety. Natural gas leaks also pose an environmental risk, as methane is a greenhouse gas.

"Repairing these leaks will improve air quality, increase consumer health and safety, and save money," study researcher Robert B. Jackson, of Duke, said in a statement. "We just have to put the right financial incentives into place."