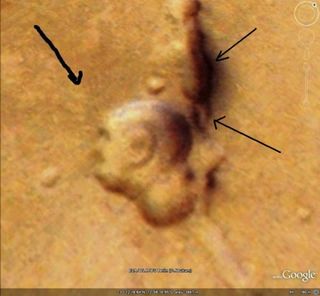 A Martian surface feature that one man says looks like the profile of Mahatma Gandhi.
(Image: © Matteo Ianneo/ESA/Google Maps/Before It's News)

Humans spend so much time looking at each other that it's perhaps no surprise we see faces where they're not — on trees, clouds, the surface of Mars and, of course, toast. But some people tend to see faces more than others and a strong belief in religion or the supernatural may be the culprit, a new small study suggests.

Researchers from the University of Helsinki in Finland studied how 47 adults saw faces in dozens of pictures of lifeless objects and landscapes, such as a rock wall or tools arranged on a table. Some pictures had distinct facelike characteristics, with eyes and a mouth at the minimum, while others had no clear facelike features.

After the experiments, the participants filled out a questionnaire to measure their religiosity as well as their belief in the paranormal. For example, the subjects were asked whether they believed in God, thought people could move objects with their mind or believed individuals could use astrology to accurately predict the future.

The religious people and those who believed in paranormal phenomena saw faces more often than the non-religious and the skeptics, the researchers found. The believers also were more prone to false alarms, picking out faces in an image that lacked clear facelike features. In one part of the test, the subjects had rated the face-likeness and emotional expression of the faces they saw. The set of supernatural believers was more likely than the skeptics to rate the illusory features as very facelike and emotional. (The same pattern was observed in the religious vs. non-religious groups, but the difference was not significant, the researchers said.)

Scientists who study religion have suggested that anthropomorphism — the assignment of uniquely human properties to nonhuman phenomena — helps explain a tendency to believe in gods. The results of the new study seem to strengthen these ties, as illusory face detection, sometimes known as pareidolia, could be loosely considered a form of anthropomorphism. The results also might explain why every so often, a piece of toast, pancake or potato chip with the face of Jesus turns up on the news or for sale on eBay.

And perhaps they are also behind our otherworldly anthropomorphism, including the many faces seen on Mars — a 2011 spotting came from Google Mars maps, with a man claiming to see a profile of Mahatma Gandhi gracing the Red Planet's surface.

The study was detailed online last month in the journal Applied Cognitive Psychology.