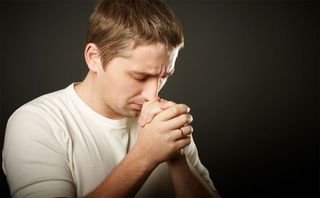 Are you more intuitive or rational? That answer may also say something about your belief in God, researchers are finding.
(Image: © luxorphoto | Shutterstock)

For many people, believing in God comes down to a gut feeling that a benevolent deity is out there. A study now finds that gut feelings may be very important in determining who goes to church every Sunday and who avoids the pews.

People who are generally more intuitive in the way they think and make decisions are more likely to believe in God than those who ruminate over their choices, the researchers found. The findings suggest that basic differences in thinking style can influence religious belief.

"Some say we believe in God because our intuitions about how and why things happen lead us to see a divine purpose behind ordinary events that don't have obvious human causes," study researcher Amitai Shenhav of Harvard University said in a statement. "This led us to ask whether the strength of an individual's beliefs is influenced by how much they trust their natural intuitions versus stopping to reflect on those first instincts."

Shenhav and his colleagues investigated that question in a series of studies. In the first, 882 American adults answered online surveys about their belief in God. Next, the participants took a three-question math test with questions such as, "A bat and a ball cost $1.10 in total. The bat costs $1 more than the ball. How much does the ball cost?"

The intuitive answer to that question is 10 cents, since most people's first impulse is to knock $1 off the total. But people who use "reflective" reasoning to question their first impulse are more likely to get the correct answer: 5 cents.

Sure enough, people who went with their intuition on the math test were found to be one-and-a-half times more likely to believe in God than those who got all the answers right. The results held even when taking factors such as education and income into account.

In a second study, 373 participants were told to write a paragraph about either successfully using their intuition or successfully reasoning their way to an answer. Those who wrote about the intuitive experience were more likely to say they were convinced of God's existence after the experiment, suggesting that triggering intuitive thinking boosts belief.

The researchers plan to investigate how genes and education influence thinking styles, but they're quick to note that neither intuition nor reflection is inherently superior.

"It's not that one way is better than the other," study researcher David Rand of Harvard said in a statement. "Intuitions are important and reflection is important, and you want some balance of the two. Where you are on that spectrum affects how you come out in terms of belief in God."

The research was published Sept. 19 online in the Journal of Experimental Psychology: General.