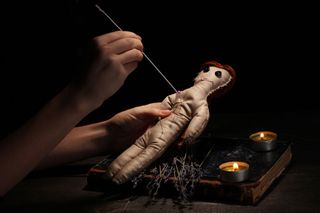 Even the most die-hard skeptics among us believe in magic. Humans can't help it: though we try to be logical, irrational beliefs — many of which we aren't even conscious of — are hardwired in our psyches. But rather than hold us back, the unavoidable habits of mind that make us think luck and supernatural forces are real, that objects and symbols have power, and that humans have souls and destinies are part of what has made our species so evolutionarily successful. Believing in magic is good for us.

That's what psychology writer Matthew Hutson argues in his new book, "The 7 Laws of Magical Thinking" (Hudson Street Press, 2012), released Thursday (April 12). Hutson scoured decades of research by psychologists in order to identify the supernatural beliefs we all naturally share, and to discover why the tendencies evolved in the first place. Here's the proof that you — yes, you — engage in what Hutson calls "magical thinking," and why.

In a 2008 auction, an anonymous bidder spent $5,300 for actress Scarlet Johansson's snotty handkerchief. While most people wouldn't waste their savings on soiled celebrity memorabilia, Hutson said almost everyone is guilty of attaching undue significance to objects associated with people they idealize. We generally agree that John Lennon's famous white piano is more valuable than an identical piano with no notable origin, for instance, and we would much rather wear our best friend's jacket than the jacket of a serial killer, even if both garments have been thoroughly cleaned. Why do we intuitively think objects carry people's essences?

Scientists think the gut feeling evolved in our ancestors as a primitive method of germ avoidance. "The theory is that belief in essences is based on our fear of germs and tainted substances," Hutson told Life's Little Mysteries. "We didn't always know what germs were, of course, but it made sense to be aware of whether someone sick touched your food before you ate it, or wore a jacket before you did. It makes sense to be wary of an object's provenance, because the evolution of that sense would have increased a person's chance of survival."

Not knowing how germs worked, our awareness of the history of our food, clothing and other objects generalized to include positive associations as well as negative ones. We evolved the belief that not just cooties, but positive mojo, too, can rub off on us. [The Surprising Origins of 9 Common Superstitions]

Psychology research shows most people wrongly assume their thoughts can become reality — even people who say they don't believe in telekinesis or ESP. "If you think about something and then it happens, you feel a little bit responsible for it," Hutson said. It's an irrational feeling. Why do we feel it?

"It's a byproduct of how we understand causality," he said. "If there are two events, A and B, if A happens before B, if there are no other obvious causes of B, and if A and B are conceptually related, then we assume A caused B."

Consider kicking a soccer ball: if you move your leg just before the ball goes flying, you naturally assume that your leg caused the ball's motion. We apply the same logical steps even if event A is merely a thought. "If you think about something before it happens and your thought is somehow related to the event, then you might consider your thought as a possible influence on the event," Hutson said.

The faulty logic gets reinforced every time you think a positive thought, such as visualizing a successful basketball free throw, and then the thought boosts your confidence, which affects your behavior, and — voila! — the ball swooshes through the net. [8 Weird Statistics about Daily Life]

What do religion, anthropomorphism, mysticism and the widespread notion that each of us has a destiny to fulfill have in common? According to Hutson's research, underlying all these forms of magical thinking is the innate sense that everything happens for a reason. And that stems from paranoia, which is a safety mechanism.

"We have a bias to see events as intentional, and to see objects as intentionally designed," Hutson explained. "Part of this is because we're always on the lookout for signs of other intentional beings — people or animals — so we tend to assume that if something happened, it was caused by an agent. If we don't see any biological agent, like a person or animal, then we might assume that there's some sort of invisible agent: God or the universe in general with a mind of its own. So the reason we have a bias to assume things are intentional is that typically it's safer to spot another agent in your environment than to miss another agent."

Or, in the words of the anthropologist Stewart Guthrie, "It's better to mistake a boulder for a bear than a bear for a boulder."

Roll of the dice

Few Americans openly practice voodoo — e.g., inserting pins into figurines of their enemies in order to inflict bad luck or pain — but studies show we're all secret practitioners. "When you do some symbolic action or perform some symbolic ritual, you tend to think it will bring about what it symbolizes," Hutson said.

In a recent experiment, psychologists monitored people's perspiration levels as they cut up a photograph of a cherished childhood possession. Unsurprisingly, destroying a representation of their childhood made the participants sweat. One possible explanation for the clammy palms is that our brains have difficulty separating appearance with reality, Hutson said. A voodoo doll (or picture of your baby blanket) conjures in your head the thought of the actual person or object it represents, and so the mere thought of the person or object being harmed makes you feel like he or she, or it, really is being.

Another possibility is that we get confused by the fact that, in the real world, causes are often similar to their effects. A big bolt of lightning causes a big crack of thunder. Red crayons draw red lines. Children look like their parents. "So we may then expect that if we perform some action, then some effect similar to the action will be caused," Hutson said.

Though it's important for us to be cognizant of real-world similarities between causes and effects, it inadvertently spurs magical thinking, as in this example: "In a classic paper called 'Craps and Magic,' the sociologist James Henslin reported that gamblers will often throw dice harder when they want a high number," Hutson writes in his book, "as if the amount of force translates into the quantity of dots showing on a die." And that's logically equivalent to throwing darts at a picture of your nemesis, or sticking pins in a doll.

Most of us try our best to be rational. But, the research suggests, remnants of the magical thinking we evolved with invariably creep in.